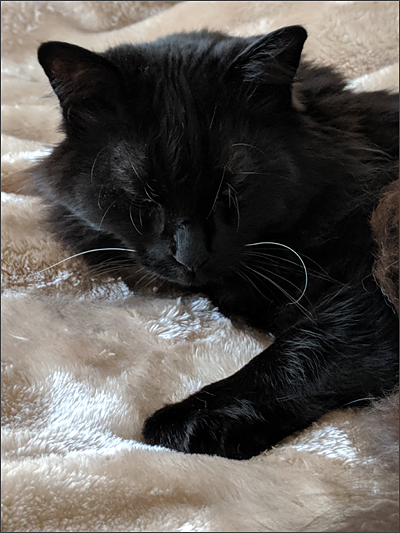 Thank Cod this week is visitorless. At least I think it is. She can't have more stray friends or cousins lurking about, can she? I mean, I need my rest and privacy if I am to focus on being so purrfectly furry and well-balanced, whisker-wise.
Posted by Gigi at 11:27 PM 16 comments:

The Intruder Returns: I Think I Like Him Now 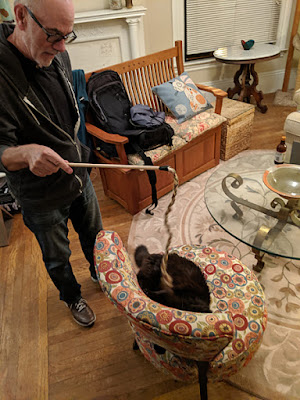 So Cousin Jim, the Intruder, was here this week. For whatever unknowable reasons, I decided that he's not so bad after all.

In fact, I played with him, hung out with him, even attempted to sleep with him. But he pushed me off the bed.

Still, mostly he was very nice and friendly to me. 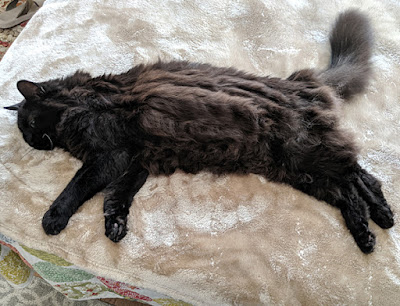 After he left, I was all tuckered out, and even a little melancholy. But the Human petted me and told me what a very good boy I am, and then I took a nice nap and forgot all about him.

On the principle of Ladies First (and may I observe what a silly principle that is), here is Jane, the Canine Viceroy, ensconced on the lap of her beloved dad. The discerning may note that she is making lovey eyes at my Human at the same time. 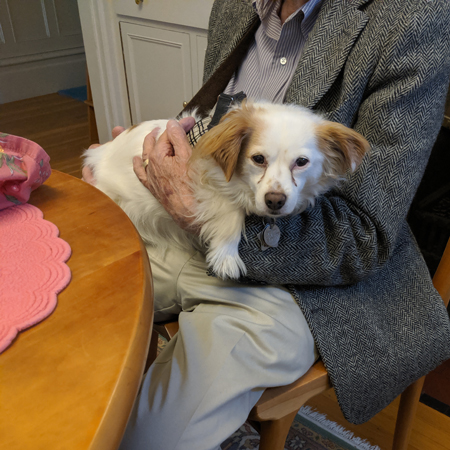 Of course I have saved the Best for Last. Even though this is one of those objectionable "She-snuck-up-behind-me-while-I -was-napping" photos, I find the texture and abundance
of my floof most pleasing and so am inclined to overlook her intrusion into my personal space. 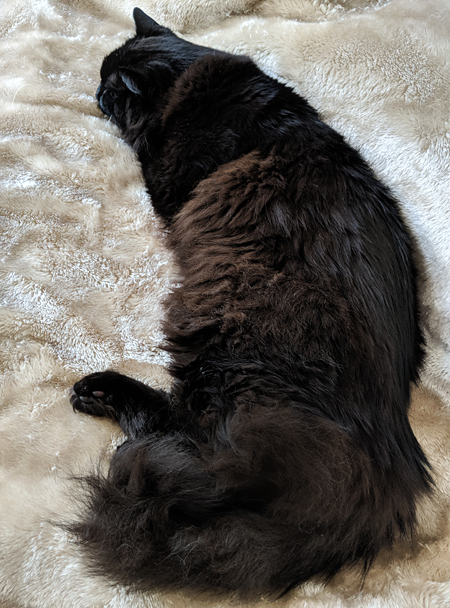 A Gift from the Bitee 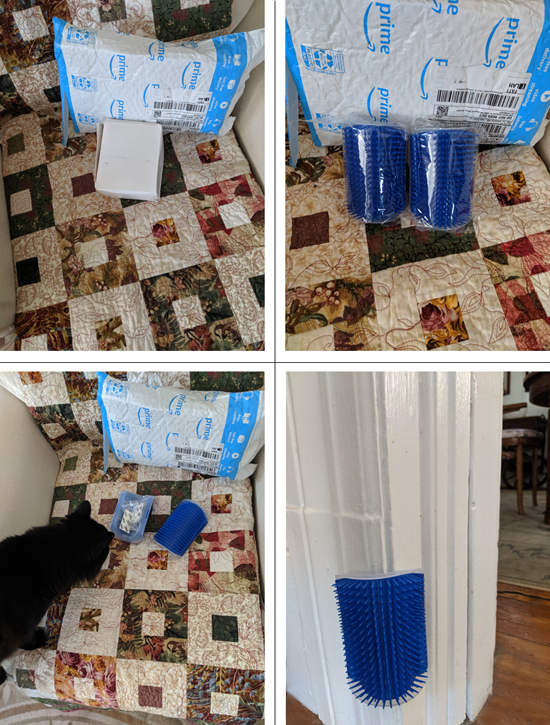 Apparently the Guest I Bit realizes that The Incident was all her fault, and so she sent me these wonderful scratchers. The Human says I am not the sharpest tool in the shed, however, and she had to forcibly grab me and smoosh my furry face into the plastic bristles. I enjoyed it (except the being manhandled part) but she says I have not *quite* got the hang of it yet.* To be fair, I think it was pretty darn nice of her to have sent me a present. She must have stopped bleeding.
* [He is evidently too stoopy to understand he can get the brushies all by himself. --Ed.]
Posted by Gigi at 1:26 AM 11 comments:

So yesterday, an animal-loving friend of the Human's came over for the first time. She had heard about me for many years, but had never actually met me (and frankly, I wasn't sure I was going to feel like showing myself until I had seen and heard and smelled her and decided *I* wanted to meet *her*).

Surprisingly, she looked and sounded and smelled okay, so I made an appearance. I even walked up and gave her some good sniffs. She was enchanted with me (as who would not be?) and I with her (well, as enchanted as I get with Other Humans).

My Human handed her my favorite brush, and I was ecstatic! Until I wasn't and, yes, I put the bitey on her. Evidently, the Human considered that very extremely naughty host behavior.  I drew blood too, though to be fair the visitor was, like the Human, rather an Old Lady and is it my fault they have paper-thin old-lady skin?

Our gracious visitor took it in stride and apologized to me for doing the brushies wrong. I magnanimously forgave her as the Human fetched the Bactine and a Band-Aid.

What a bunch of crybabies Humans are!
Posted by Gigi at 8:15 PM 18 comments: 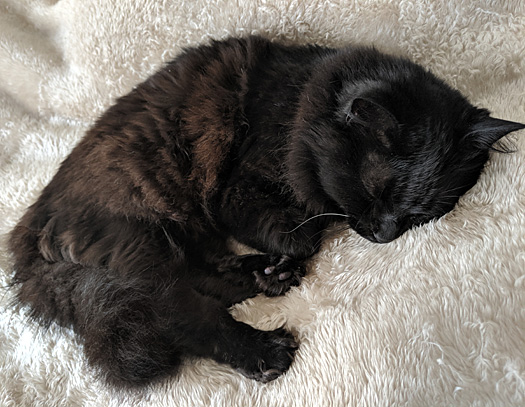 The *Human* thought this picture made me look all snuggly and adorable in our now-very-cool weather. *I* think it also makes me look rather ill-proportioned (which I assure you is far from the truth--I am purrfectly proportioned as you all know). In any event, Yours Truly is One Happy Boy today!

Maybe the Corner Is Cooler? 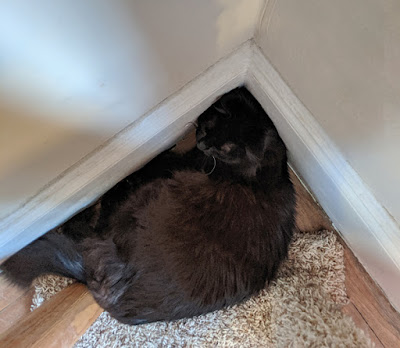 But I really don't think so.

They *said* it would be cooler today.

But really? Well, they're bald-faced liars is what they are.
Posted by Gigi at 9:23 PM 13 comments: 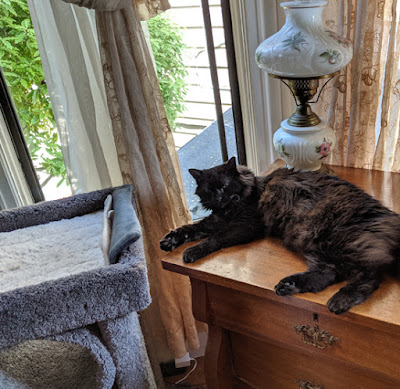 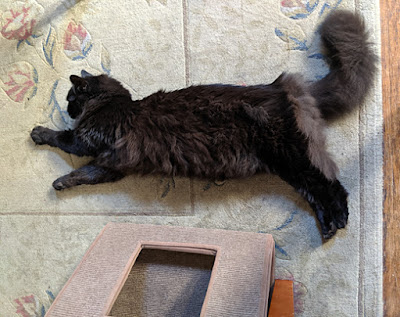 Sunday Selfie: Sunshine on My Shoulders 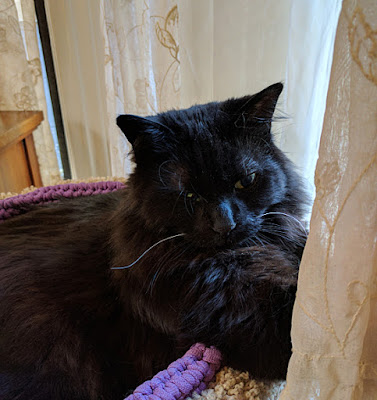 So Apparently I Am Just Not Good Enough 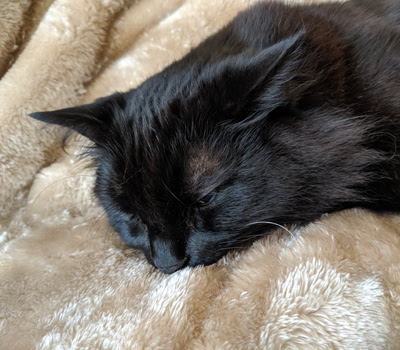 to be the main attraction on my own blog anymore.

Apparently these long-necked burds are a better draw.

Nah, I Don't Gots No Fleas 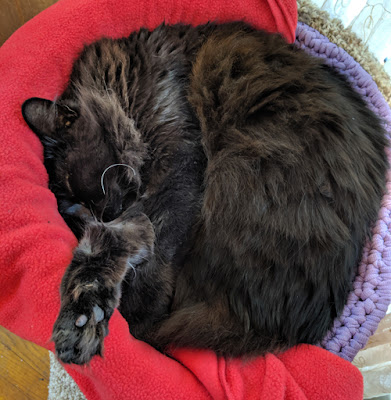 But the Human just can't stop being an English teacher even though she retired almost a year ago, and she thought Father of Fleas was nice and alliterative.

I say, why couldn't it have been Father of Frogs, or Ferrets, or Foxes. Father of Falcons has a nice ring to it.

But no. Fleas came to mind and she was (surprise!) too lazy to think of something more refined and regal.

Sunday Selfie: Allow Me to Present Myself 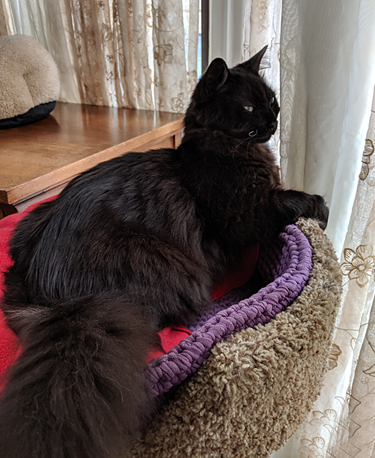 King Spitfire Parkborn of the House Francisco, the First of His Name, King of the Ferals, the Moggies and the First Felines, the Rightful King of the Western Kingdoms and Protector of the Realm, King of the Inner Sunset, Khal  of the Great Sand Sea, the Untamed, Breaker of China and Father of Fleas.*

Nice to see you.