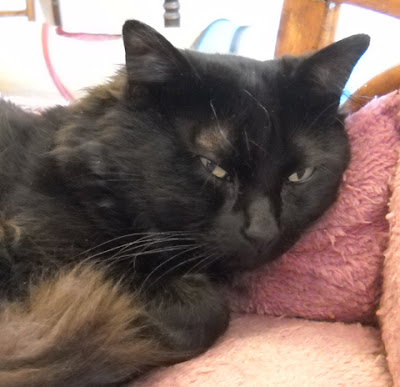 Since I began blogging in April, 2010, the Giants won the World-Series, William and Kate finally tied the knot, the Arab Spring changed the Middle East, U.S. troops stood down in Iraq, and all those Chilean miners got rescued.

Now I'm not claiming I had a paw in any of that, but c'mon. Could it really all be just a coincidence?

We think not. HaHaMeow!

Come to think of it, a lot of things have certainly improved since you started blogging, Spitty! Why am I not surprised?

All small influences add up... You had a part.

As long as you're working for good, Spitty. :-P

Never underestimate the power of the cat.

The Countess Kathryn Isabella has caused her PM to send greetings to HRH Princess Treasure and Princess Coco, the Adorable. Only just now.

Spitty, congratulations on reaching this milestone. We've enjoyed all 700...srsly....

Oh Spitty, we are sure you had a paw in all those activities. Well done. And conga rats on your 700th post. That is really well done. take care.

I'm convinced it's NOT a coincidence Spitty. Concats on 700 posts!

Spitty
You know what they say about butterflies as a cat of your wisdom those 700 posts had a lot happening. Concats on this achievement.

You know... it's true what they say... behind every great event, THERE'S A CAT! purrs

And don't forget, millions of LadyCats all over the WORLD blew gaskets! Keep 'em coming Spitty, here's to the next 700!

The world is a better place because of you Spitty!

Concats! You iz an expirt on posts az well az a key figyur in weld events. I iz afrayd mai bloggy iz sadly neglektid. Of cors I blame they hoomanz becuz I can nawt be expected to lift a paw, correkt? Purrs, Pandy

Congrats Spitty! That sure is a lot of paw tappin!

There are no coincidences, dood...

The Florida Furkids and Lexi

I did no such thing!

Happy 700 posts! We hope you have lots more!

700! Wow! 700!
that is so Pawsome! Me just can't believe so many!
Concatulations!
Me would LOVES to goes to the Debutante ball with yous, are yous sure yous does not want to take some nice young Deb?
Kisses
Nellie

Congratulations on your 700th post! We've enjoyed every one of them.

Well DONE, Sir Spitfire! Yes, undoubtedly you have had a paw in many good things over the past 2 years.

Audrey says she does believe you could squeeze into her beddie wit her. And it is a RED bed, not a pink one.

Pawsome accomplishments, Spitty! No doubt the world is a better place because of you!

Congrats Sir Spitfire, you are furry powerful indeed! Looks, I wouldn't choose to have a "bromance" with just anyone you know...