Not A Garden Tour #Elebenty-Six

So the Human and her friend took a nice stroll
at Crissy Field on Wednesday (thereby cleverly
avoiding the bajillions who will do so Thursday).
They enjoyed watching some of the America's Cup
entrants practicing, making a nice contrast
with the somewhat clunkier container ships sharing the Bay today. 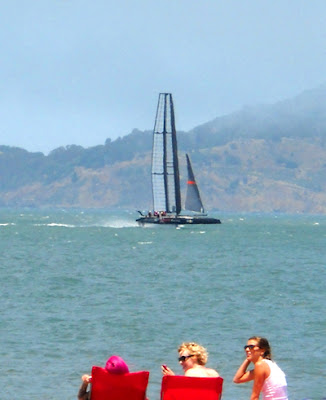 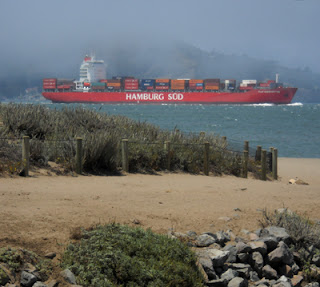 There were eight of these ginormous and strange sculptures
lining the path along the shore. Apparently, they also located
some parts I've been missing for almost a year! 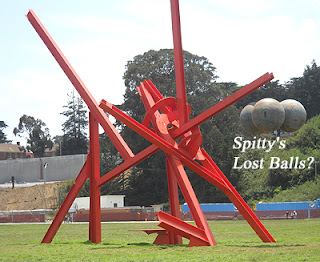 Of course the blessed fog rolled in to provide
SF's natural air conditioning as well as the soundtrack
that accompanies most afternoons and nights. 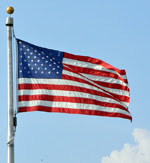 LMAO your balls were massive hahaha smart of the human too

Dood. Those are some big balls. How the heck did you eve walk???

And which part was the foghorn? Ha ha ha meow!

Um, Spitty... if those WERE your er.. things.. then how in the world did you walk?? There's three of them!! Have a wonderful 4th, Spitty and human!

Star says: I know how I'll be spending tomorrow... UTB! Or crushed against my daddy. Stay safe Spitty, and when the booms are over, maybe we can have another snuggle!

that foghorn is haunting...even in the middle of the day! Cool!

Whoa! No one could accuse you of not having balls—at least when you still had them. HAH!

TW loved the video cos she thinks the Bridge is lovely. I'd much rather see videos of you.

BTW, tough seeing the Giants no hit last night. NYY is being one-hit by someone who's not a quarter of the pitcher Bailey is. I may be coming over for some consolation.

Oh Spitty, you made our Mom laugh and spit her drink out!! Good job!!!!

Spitty, those balls?? You flatter yourself. ;)

Spitty...surely not. I don't remember such...

You had THREE? Were you UNIQUE?

Happy Independence Day, Spitty (and to your human, too)! :)

Spitty, you're gonna need some help getting those balls home.
; ) Happy 4th!!!
Katie

They still do that race? We thought it was all surrendered to Australia... On account of mousies or somethin.

I am delighted to share in a pint and some pork scratchings with you Spit, for the sake of the continuing entente cordiale. The Staff says I'm a bit revolting sometimes when I bring her a carcass for breakfast! So maybe something like that happened in 1776! S'all in the repast now ;)

Good thing you don't have to carry those balls around Spitty. You wouldn't be able to go far.
Great pictures What a fun place to go.
A very Happy Fourth to all of you.

I am sure glad the lost and found department finally fessed up Spitty!

Have a wonderful 4th of July. I love your place - a ride with the cable car of SF is on my mom's bucket list. btw: I hope that are not your lost balls in the picture- they are enormous :o)

You wish, Spitty! We're positive you didn't have three balls ;)

Have a happy Fourth--UTB if necessary!

Bawahhwawwah your balls :) Have a wonderful July 4th xx00xx

Happy 4th to you. Thanks for the video of the bay. We don't get to see it too often anymore. For the forty years our mom's parents lived in San Carlos, Mom always loved to visit as they had a lovely view of the bay, the city and the Bay Bridge. She really misses it. Purrs and hugs, Lily Olivia, Mauricio, Misty May, Giulietta, Fiona, Astrid, Lisbeth and Calista Josette

OMC they display your balls out there so that everyone can see? Isn't it ethically wrong?

Love the video of SF bay. So beautiful! Wishing you a happy 4th of July!!

May the Fouth be with yous! Thanks for coming over. Yes, me knows my eyes is still Yucky! Mommy will has to takes me to the vet, but wes has to wait until its not quite so hot
Kisses
Nellie Bellie

LOL I am still laughing at the balls. Those are great pictures. Loved the video. Happy 4th of July.
Sue B

We luvluvluv Crissy Field...just not all the peeps! How great to see those pawsome sailing vessels! Lucky you with the fog, we are hotter than you know what over here in the east bay...snap!! Hope it changes soon or I'm coming to your place Spitty...so be ready to move over in that pink beddy of yours, paw pats, Savannah

Three huge balls? You must have been secretly relieved to have lost them.

Oh, Spitty, your balls not only grew, they sprouted a third! This America's cup thing must need lots of practice if the fog can arrive like that! Our humans say the Bridge was not foggy when they were there. But of course there has been lots of CLIMATE CHANGE since the Dark Ages.

HAPPY FOURTH OF JULY, my friend!

OK. This takes the cake! You are the only animal who can have the balls removed but still get to go visit them. Well done, Spitty. Hope you all had a fantabulous 4th of July.

lovely video, Spitty. I hope you leap up to defeat the Fog Monster and get your balls back. are they BIG or what? yowza. Happy Fourth to you to, My Liege.