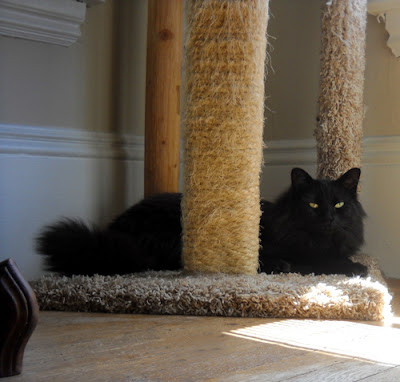 As you may have noticed, I've been sulking for a couple of days,
hot and harried by the 90-degree temperatures and my Human's
irritating-though-unsurprising failure to provide consistent service.
On Thursday, there was "Back-to-School-Night" during which
patient adults had to endure the decidedly unsnappy patter
to which ordinarily only their air-headed teenage offspring are subjected.
Honestly, it's so hot I don't know what her excuse was yesterday. 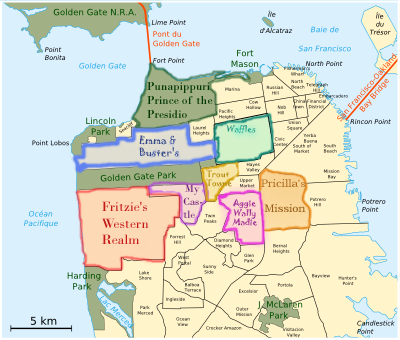 However, I have not been completely unproductive.
I have been appointing Viceroys! Last Thursday,
I wrote of my chief Viceroy, Fritzie, which apparently
encouraged other friendly Kitties to step up
and volunteer themselves as additional Viceroys.
As you can see above, the Richmond District, north of Golden Gate Park
has been assigned to Emma and Buster (their Mom likes the restaurants there), and
the Haight Ashbury will be governed remotely by the Tabbies of Trout Towne.
Glogirly's Katie offered Waffles up, so he's been (virtually) stationed
in the Western Addition, and cousins Aggie, Wally and Miss Madie Mitten Kitten
will defend Noe Valley and the Castro.
Update:  Pricilla has maaa'ed that she would accept the Viceroyship
of the Mission District, chock full of history, murals, excellent food,
tacquerias and more Hipster doofuses than you can shake your tail at.

Other kitties volunteered themselves as well, and there are plenty more
neighborhoods to go around, Kitties, plenty! Surely somekitty will want
to become the Viceroy of the New Bay Bridge! And what kitty wouldn't want
to govern from the lofty heights of Twin Peaks?
So stay tuned for further appointments to come.

Also, my long-ago offer to conduct a coronation or two in Maryland
has at last been accepted. Negotiations have been initiated, and if all goes well,
you may expect a ceremony by Halloween

Posted by Spitty-the-Kitty at 3:42 PM

Ugg to that heat. Seems many a kitty rule each street

Oh, that heat sounds so oppresive, King Spitty. We do hope it lets up soon. Glad to hear the Viceroy appointments are moving along so nicely!

Binga is not allowed to rule anything because she is out of control in this house as it is. But I'd almost want to volunteer her for the Tenderloin, since that is the type of place she belongs.

The King of Maryland is my Herba from the Burba. Everybuddy knows that. I see your Giants pitcher came within 1 strike of a perfecto last night. Hey, maybe you can stuff HHGutt in a locker at Candlestick Park. I don't like the sound of Levi Stadium. Ugh.

Hey, Spitty, we know all about bridges since there's two of them here that gets you on our island. So maybe we could be viceroys of the bridges.

And we sure hope it cools off for you...we don't like it when you sulk.

If there's two things we kittehz here understand, it's heat and unproductive humans!

May we be the Remote Vegas Viceroys? Anything else involves (shudder) car rides, with the attendant wailing and foaming...

Hmmm, Pricilla is no longer maaaaing at you

Jura, Jaava and Sampo want the Golden Gate Bridge as they think it would be ace to play on it loads. As Prince of the Presidio I could keep them on the Bridge so they would not cause chaos in town itself.

She is Queen of the Farm so why is she not a viceroy?

Do *I* get to be Viceroy? I may be young, but I rule everyone in THIS household. I bet I would make a splendid Viceroy. Heck. Wait. I think I should be made QUEEN of all of Asia. Yeah. That sounds a whole lot better.

It's cooled down here now so I am loving it, I can go running in the fields with my ball xx00xx

My goodness Spitty, you've sure been busy and had that Royal Rear in Gear!

We know just what you mean about the heat!! It has been in the upper 90s here all week! AND the mom had the gall to take us to the V-E-T in that heat (the transportation vehicle was cool, but STILL!!).

I'm glad you are back. Our heat disapperead (maybe to you) and it's fall here now. I'm very busy, must catch all leaves :o)

Not quite sure what there is left, Spitty! but if you need a bodyguard, I'm your mancat!! We've got a couple of bridges like Island Cats, to get us on/off the island, so I could help them out if they become Bridge viceroys! xx

Well Spitty your territorial coverage expands as much as my Mom's waistline has been lately. Remember, if you feel the need for defense here in Virginia, I'm available. Happy Sunday!

What!! Yu haven't thought of ME as viceroy of the New Bay Bridge?? Or the GG?? Spitty I am crushed you forgot your East Bay Pal!! And if I can't rule the NBB, then how's about My Diablo and all,of its surrounds...but the NBB is my first desire....paw pats, Savvy

Ms Stella in a rare moment of generosity, would like to nominate Oliver if you have any medium sized bodies of water that need guarding, or whatever it is that absentee viceroy/landlords do.

Well, Spitty, I has been bizzy and remiss, apparently, as I missed this entire Viceroy offer, so my bad. Anywho, you know I will always be of service...and I guess, if you say so, I will gladly serve this so called Royalty of Maryland, even if I suspect it is not Moi. It's not Moi, is it? cuz that's likely, that I would be Queenified and then forget about it. It happens...

The offer still stands to being a Knightess of teh Realm, when eva and where eva you needs it.
glad you are back you hot handsome hunka hunka furs.

Does the Easty Coasty have a Viceroy? Hmmm. This could add grrreatly to our homes stature in the community.
Congrats to all those so given such an honor
Timmy

Spitty you have been busy and so many decisions!

Seems that while your mum has been busy you have achieved a lot. cant wait to see everything. That heat is enough t0 slow everything down though.. Hugs GJ x

Hope you get some cooler weather. You have been busy.
Sue B

Dear Spitty, May we request being appointed the remote Viceroys of Treasure Island? Our humans were married there, and we think they would like that. We cannot believe it has been 90 degrees in San Francisco. That is ridiculous. Must be this darn global warming. Purrs and hugs, Lily Olivia, Mauricio, Misty May, Giulietta, Fiona, Astrid, Lisbeth and Calista Jo

Wow you've been busy, Spitty! Don't forget to do some snoozing, too!

I've been MIA for too long (inefficient human of mine!), I don't understand what's going on.
Can I still be King of France governing from Texas?
Purrs

Yay! Thank you Spitty for this honor. We will take our jobs seriously. Our mom volunteers to check every dish that all the restaurants in the district offers to make sure everything is safe for the humans and kitties.

I am used to snoopervising the cows in the field next to us so I could be Viceroy of Cow Hollow for you. It doesn't look to be a very big area so I am sure I could manage it on my own.

Oohhh... Waffles is a Viceroy? My marmalade brothers Seville and Rushton will be oh-so-jealous.

I'm gonna have to tell 'em.

Maryland!?! Mes must goes with yous to confur Queenliness on your selection Spitty!
Kisses
Nellie