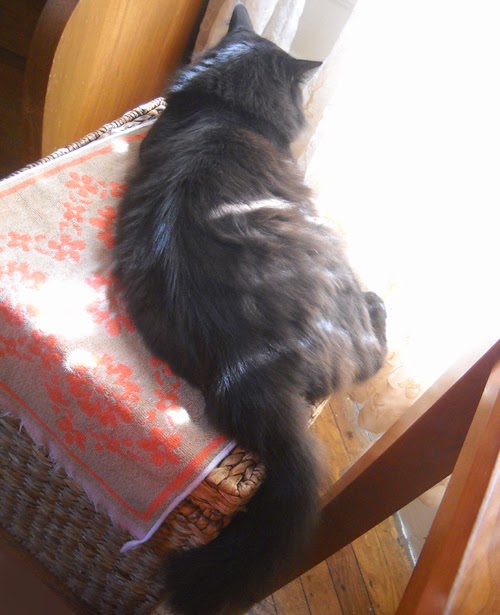 when I relax comfortably on this little basket-table next to the Human's computer desk, I am in the mood to be petted and coddled and tickled and so forth.

But other times, I like to bask in the warm sun, while lying in moderately close proximity to the Human, and yet be left strictly alone.

I ask myself: Why is it the Human is unable to differentiate between those two states?

Anyone? Anyone? Bueller?
Posted by Spitty-the-Kitty at 5:36 PM

Spitty, humans are just dense like that! I don't get it either.

Humans know only after receiving some bitey or kicking from kitties!
Your basket table looks very comfy and that's such a nice sunny spot :-)

Some humans are just not too quick on the draw

They should just *know* the way that we know things. But they aren't very perceptive. Take pity on them.

You need a sign that you can flick, says brush or not brush

Hmm... my guess is dat hoomans ain't too bright!

I think you might have yourself a particularly 'thick' human Spitty if she hasn't been able to work that out by now. I'm sorry - I can think of no solution except continued application of a bitey when appropriate.

Spitty, they are ALL that way

We have often wondered the same thing, Spitster.
Humans are so dense!

It is a universal ignorant state in humans. We have to accept it and pity them. And ourselves.

Cuz humans are not da sofistermacated.

Spitty I think humans are a lost cause! Just meowing!!

Humans are a very strange lot......WE are terribly psychic - all of us....yet humans seem to be SO FAR BEHIND in that department. Why can't they just "know" when to touch us and when to just LEAVE US ALONE?!?!?! Sigh....alas it's probably due to their less evolved brains. We do what we can........

I love Sammy's answer and I agree with him. My mom learned several kitties ago to leave a basking kitty alone. If you must, one light pass over the slowly baking furs and leave. You hand will remember the sensation of softest warm furs. Leave kitty alone.

they just don't get it, that's why!

I think it's because they're only slightly smarter than dogs, Spitty. I probably don't have to say more than that.

Prolly cos you don’t bite enough. TW doesn’t touch me cos she knows if I don’t want to be touched, I’ll sink my teeth into her hand. She’ll kiss me on the head just to see how much more she can get away with.

William and C.K have some purrty good answers. We think it is 'cause they are so lazy that they only use five to ten purrcent of their brains. XO, Lily Olivia, Mauricio, Misty May, Giulietta, Fiona, Astrid, Lisbeth, Calista Jo

because she isn't a kitty?

Spitty why is it so obvious to us but totally lost on them?

At least your Human doesn't grab you and give you hugs. Mommy does that with me. All the time. Even when I'm sleeping. And she wonders why I bite her. Heh.

Humans are always confused Spitty, they can't help it.

Humans just don't get it pal. Quite frankly, they don't have the smarts that we kitties have. You'll just have to put up with it I guess, or really let her have a swat!

Spitty, your human just wants to touch your lovely furrs and hope to get a purr or two...she'll do anything to get these things!

Humans haven't mastered the art of mind reading yet Spitty. Unbelievable I know, but true.

Spitty...that this the question of the ages. Humans just don't get us.