The Human and the Police 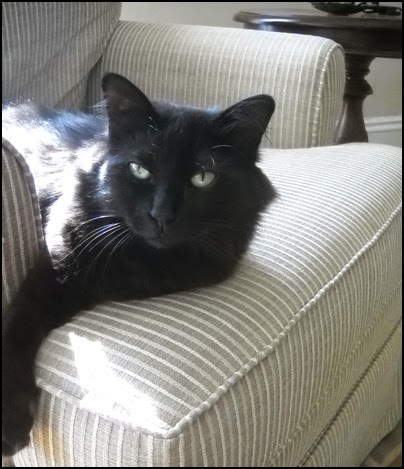 On January 27, the Human got a fix-it ticket for a missing front license plate.
In order to get replacements, she had to surrender the other plate, which means she has been driving around for almost a month with NO license plates.
Finally, on Saturday, the new ones arrived. After they were properly affixed yesterday, she bit the bullet and went to Park Police Station near our Castle--not easy to get to either--you can *see* it--you just can't easily drive to it!
Anyway, she parked & walked to the station. An officer outside bid a friendly hello and so she said she needed a fix-it ticket signed off so it would cost only 10 green papers instead of 117.
He asked what the ticket was for and she told him it was for the missing front license plate.
He said, "Sure" and reached for it.
She said, "Don't you want to see the plates?"

He said, "No, in my experience people who come TO the police station of their own free will are usually telling the truth."
LOL! She coulda got that ticket signed off a month ago without replacing the plate at all! Stoopy Human!
Posted by Gigi at 6:22 PM

Your human sounds very honest, Spitty. This sounds like something OUR humans would do, too. MOL!

OMC, this sounds like something that would happen to the head peep, too. She is very careful about following the rules, too. Humans aren't crafty like cats at all!

She coulda been stopped again and fined again for the missing plates. Just meowin’. Those po po don’t cut us no slack.

The mom woulda been that stoopid too.

Now that is a story of trust and honesty to warm the coldest heart. Not stoopy at all: law abiding and honest!

hmmm...gotta store that away for the next time we break the law!

MOL! Humans are so funny!

MY mom would have done the same. There is no helping our humans. None. Especially our moms. They just do the right thing. Sigh. No sense of adventure at all. XXOOO (I loved the Penthouse last night. Especially since you shared it)

She must just have a trustworthy face haha

Huh humans for you???? Have a wonderful Wednesday.
Best wishes Molly

yeah but then she would have ended up with another ticket.....I doubt she would be that lucky twice!

Spitty, it takes a lot of courage to walk into a police station, even when you've done nothing wrong! I'm with your momma...I had to go in TWICE to get a copy of a police report...yep, just a piece of paper...and I broke out into sweats and heart palps each time! I was more nervous than on my wedding day! Serious stuff, Spitty!

Yeah but she did the "right thing" and that oughta get her a few points at the pearly gates one day.......FAR in the future.....

Either way, she had to go to the police station, an she might not have been as lucky with the officer she met on that occasion. It's all water under the bridge, and she didn't make you walk to the police station on bleeding paws with the ticket in your mouth. Bet you can tell that our mom wrote to comment and not us kitties! MOL! XOCK, Kitties Blue

Ha, here mum had to go and show them she got the tail light fixed and they did come out and check. But better she got it all fixed up.

Dad doesn't have a front plate on his car because it would make it look 'ugly'. I'm sure he'll eventually get a fix-it ticket too. The plate is in the front of his car, so it will be easy to fix. But he won't like having to do the ticket paperwork!

We're glad it was all over lickety split.

Mommy used to live in a small college town. One night she was driving a friend home from work and got stopped by the police. She was petrified.She'd never been stopped before! What had she done? When she rolled down her window the nice policeman handed her her back license plate. It had fallen off and he had been following her so he could give it back to her. No ticket, just a friendly policeman! Small towns, gotta love them!

Tee Hee!!
Mommy worked for the police for a while and they is all like that!
Kisses
Nellie

Sounds exactly like my stoopy human. To truthful for her own good. - Princeton

MOL, bet dat copper just wanted to go get some donuts. Speakin of which, I's hungry . . .

That is funny! He is probably right!

Now Spitty. You know your human would never do such a thing!

Plus, what if a *dog* or something stole the front plate and is *pretending* stuff with it? That would be pretty bad.

Spitty, your human has something our mom bean calls in-teg-gritty. She says that is a furry good thing for a bean to have. It sounds kinda dirty to us, MOL

No, not stoopid. A good, and honest, citizen. Well done that human.

But then it would have been the ONE time the police guy checked, wouldnt it?