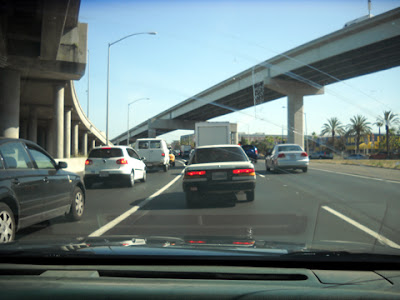 Caturday, June 16, dawned bright and clear.  The Human and Aggie and Wally's Dad set out happily and hopefully at 9:00 a.m. It was the purrfect day for a run up to Sacramento to collect New Kitten (a little waif who had obviously chosen the right doorstep to mew pitifully upon).
Because who lived there but . . . 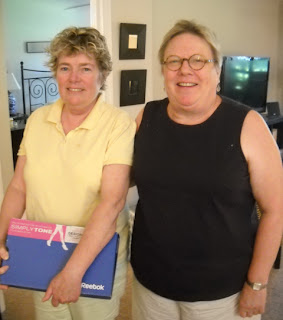 the Human's dear college friend, Patty (r.), and her longtime partner, Annie. Their last name is evidently "sucker" and HellKitten knew it.
The Human and A&W's Dad had even brought flowers for the Foster Moms: 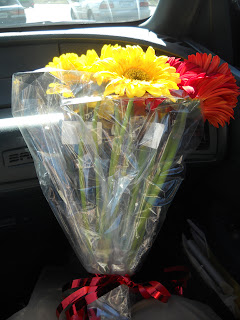 The first meeting could not have gone better, even though HellKitten
was still sporting the Hoodie of Shame from her LadyGardenectomy the previous week: 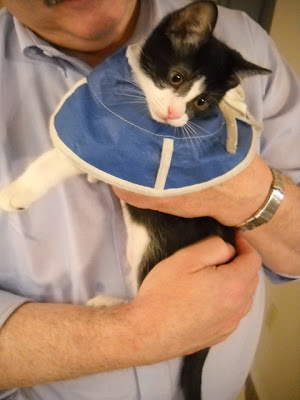 A delicious lunch was consumed and soon it was time to head off to HK's new home in sunny San Francisco! All of HK's new possessions (Sparky the Dog was not among them) were ready to be packed up . . . 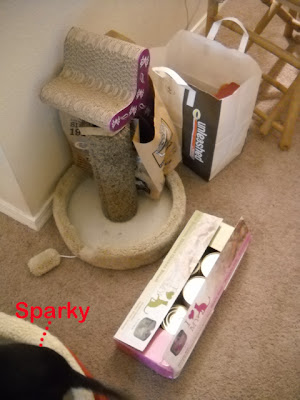 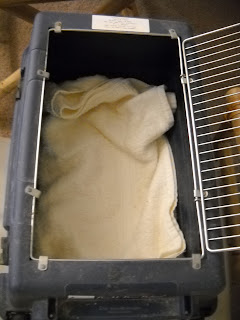 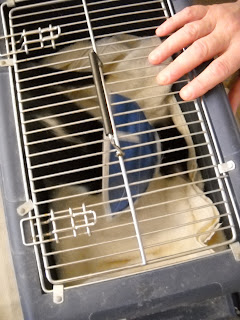 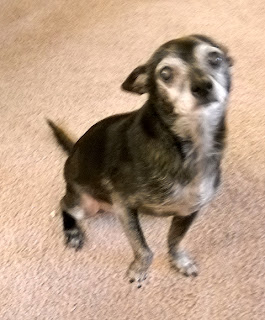 And off they went for a quick drive back to S.F.
Or so they thought. 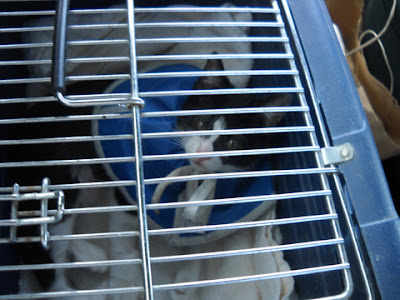 Then, suddenly: Klunk! klunk! and klunk again!
The dash lit up like a Christmas tree and the happy trip turned into HellKitten Visits the Bates Motel.

A&W's Dad did a masterful job of maneuvering the car off the freeway into the thriving metropolis of Fairfield, but from there the day devolved into chaos. AAA could tow everyone to San Francisco, No they couldn't, Maybe they could, Yes, No. Who knows?

Meanwhile, HellKitten was panting in distress from fear and loud traffic noise and the heat.
The Human looked up and Lo! an Oasis in the Sahara: Motel 6!
Yes, it was a little decrepit, yes the clientele looked a little shady.
But still:  Air conditioning! Water! Ice! Liberation from the PTU!
A room was obtained and joy reigned once again. . .at least temporarily.
BTW, can you tell HellKitten is a "Hemingway Cat"?
Just look at those extra toes!
(Also: Isn't it special that Motel 6 has it's own bedspread line?) 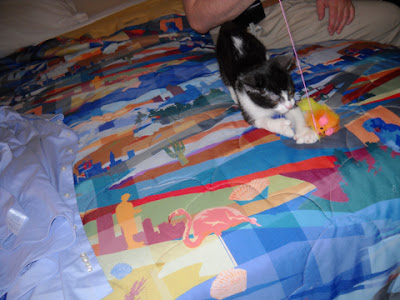 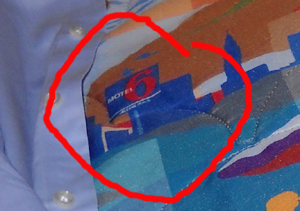 After tearing apart significant quantities of Human skin, ripping the eyeglasses right off her new Dad's face, and putting the bitey on every available appendage, HellKitten was ready for a Time Out while the Humans made one frantic phone call after another. 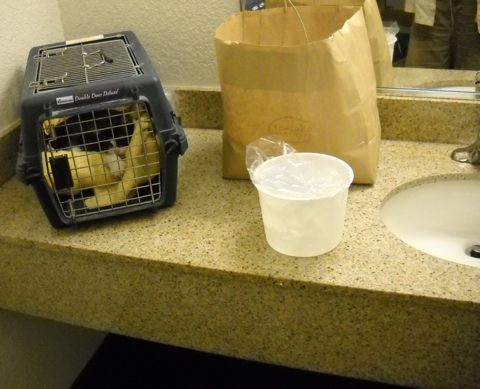 In between calls, and a delicious cheese-sandwich dinner from the gas station next door, the Humans played with HellKitten who exhibited no ill effects from the day's adventures. The same could not be said for the Humans, however. 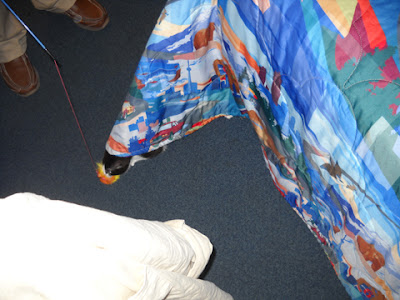 Eventually, the Cavalry arrived in force and HellKitten, the Human, Aggie and Wally's Dad and the gravely wounded car were all conveyed back to San Francisco. Since it was after midnight, the Human failed to document in photographs HellKitten's arrival at her new furever home. (It must be noted however, that Big Boy Wally bolted in fear after his first look at her. He's no fool, hahameow!)
Further reports pending--stay tuned!
Posted by Gigi at 7:32 PM

What a FABULOUS day! For HellKitten. We are awaiting part deux.

Alasandra, The Cats and Dogs said...

With such an auspicious debut, you know HK is going to have one adventure after another!

Sounds like a hellish day all around. Can't wait to hear how HK made it all up to everyone.

It all sounds like QUITE an adventure. And one WE are glad we werent part of!!!

Sounds like the trip from hell, not the kitten from hell! Glad everyone made it home. And Spitty dear, you should be happy it didn't come to YOUR house, no?
I hope everyone settles in quickly!

Wow, that made us tired just reading it! What a debut! We can't wait to hear more.

OMC! HellKitten is def going to be a handful. We're dying to hear what happens next.

What an adventure! We're glad everyone got to their destination eventually and HellKitten wasn't too flustered from it. We wonder if HellKitten will visit SpittyKitty anytime soon? :)

Gosh, those poor people. We sure are glad Hell Kitty got our of the carrier for a little while. Sounds like the Hell trip of all times. Can't wait to hear the next chapter.Take care.

What an awful thing to have happened. What a great chronicler of the news you are! (chronicler..is that a word? Is it even remotely spelled right? Only the Shadow knows!)

I am so happy for the little one! What a trip though!

Eeek. Nothing like unexpected interruptions to take the fun out of an adventure, even if they turn out to provide an interesting detour! See, this is exactly why my mom claims to miss her '63 Chevy--short of an engine meltdown, there was nothing she couldn't fix on it (although the trunk was apparently stocked with tools and parts and it got about 9 miles a gallon and that was about 20 years ago, for meowing out loud). But I digress.

The HK does look cute, although I would advise A&W's dad to balance it out with a new little boy right away!

aw geez - well, at least the kitten is home. :) mom has had a few of those adventure - but never quite like this one. glad everyone is safe!!

The humans should consider themselves lucky that HK didn't go under the bed and refuse to come out. That coulda added disaster to disaster. Dad's got his work cut out for him. TW's mumbling something about returning HK while there's still time. HAH!

BTW where can I get one of those neat bedspreads? lol

What an adventure! HellKitten sure does look like a sweetie. Super duper cute! purrs

HellKitten certainly lived up to her name as that journey to her forever home was filled with adventure.

Oh what a fun documentary!! HellKitten looks so cute and adorable and innocent. But sounds like her personality may agree with the name, haha :-) It's very cool she got extra toes. I look forward to the next report!!

You had me at Hellkitten. I can't even remember the rest of the story. (except for the nightmare flashback on that branded bedspread).

What a big adventure for a little kitty! We can't wait to hear more about HellKitten

now that was an ADVENTURE!!!
We await further installments of HellKitty.

Whoa! Now that's a gotcha story that will go down in history! We can't wait to hear more about HK. And we love a cat with extra toes!

Wow, it sounds like HellKitty has an attitude I can respect!

What an adventure, we can't wait to read more.

Those toes is the first thing we noticed on the little hell devil!Just like our good friend Angus!
An excellent re-telling of an awesome adventure right down the the nommy (not) cheese sandwiches and the very special bedspreads. (Which by the way they have those so that everyone will know where you stole it from if it shows up at your house.)
And Wally turning tail and running from HK, like he can see the future or something....?!

SO exciting! What a great day for HellKitten. We can hardly wait to find out what happened next!

Excellent reporting! Me can't wait for the continued tail of HellKitty!
(Me loves the name)
Kisses
Nellie

I think I know where that Motel 6 is! And there's foods nearby. A STEAKHOUSE, even. If it's the same one...Not a half bad place the break down, but man, yesterday was so freaking HOT...I'm glad the motel was that close...