Ring Around the Rosie/Pockets full of Posies 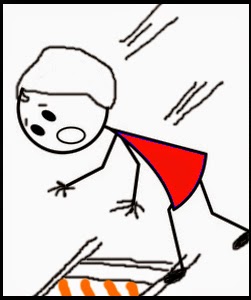 Ashes, Ashes
All Fall Down!

So the Human did an unbelievably embarrassing and stoopy thing yesterday. She was waiting to cross the street in front of her school, and she waited while a car and then a fire truck passed. Then she started toward the crosswalk and suddenly she was flailing and falling down on the sidewalk for no apparent reason! She ended up face-first on the pavement with all her stuff scattered to the four winds in the street as she eventually realized she'd caught her foot in a sawhorse-type parking sign that someone had laid flat on the sidewalk. STUPID someone! She had been looking at traffic and failed to notice it there, lying in wait.

Just as she was internally assessing whether she could, or even wanted to, get up, she heard the thunder of running footsteps and looked up to see four--yes FOUR--firemen who'd leaped off their truck just up the block to come to her aid. While some helped her get up, others picked up all her scattered stuff including all her change (nickels, dimes, quarters, etc.) that had rolled away under parked cars. It was, in retrospect, pretty hilarious. The one fireman said he'd seen the whole thing--foot catching in sign, windmilling arms, fruitless efforts to prevent the inevitable, the SPLAT! He said for a second he thought she'd catch herself--but, alas, no. Fortunately, she doesn't think she did any lasting harm--except to her pride of course, and a large and very tender bruise on her knee.

She went to work, and the new Woody Allen movie, and out to dinner and finally came home and resorted to ibuprofen and ice. She mostly stayed home today and rested the knee. But notice that she failed to help me do my blog post last night, and even tonight's is all about her.

I ask you, Kitties: Would any of US ever trip over a sign? Hah! We has the graceful.

Oh, no! We hope that your human's knee feels better soon, even if her bruised pride takes a little longer to heal after doing that in public.

Whenever the paramedics or firemen get called out to the head peep's workplace, there's one question that goes around like wildfire, so we were instructed to ask: Were the firemen cute?

Ouch indeed, you need to teach her some grace lessons,stat! lol glad it turned out well besides the ego though

Oh your poor human. Besides being terribly painful it was excruciatingly embarrassing! I am so glad the fireman helped! And usually they are cute. I have seen a few I wish I had.
Katie's mommy

Oh cod, my mom's all, Oh yeah, there's that split-second realization that you're going down because she's done that without a sign in the way! We're all glad those firemen were there to help!

OK, enough of that, Human. Back to meeting Spitty's every need!

Luckily the fireman who saw it all happen did not have a mobile phone to film it all! Or did he...hehehehe.
Well, we do have the graceful, but we also have to have sympathy for your Human and hope she is healing up well from the physical injury, The mental shame of it might take longer - especially as you have broadcast it to the world.

Oh yes, Spitty, we has the graceful, for sure. But we are sorry your human had that scary mishap! We are glad she got to meet some nice firemen, and that she is okay. Purrs and prayers for her knee to feel better.

Sending lots of healing purrs to your human - so glad it wasn't worse and that the firemen came to her rescue. Our paws are crossed for her speedy recovery and a return to normal service for you, Spitty!
Purrs ... Rainbow

This is why humans are in such need of feline supervision! They can't be left alone without risking such embarrassing and painful events.

Spitty my pal, we'd LEAVE the sign for the human to trip over if it means getting them home with us all day! I hope she's not too weak to give tunas and treats, cause that would be uncool. Maybe those firepeople could bring tunas and treats as well, they sound handy.

Well Spitty, to top it off, she humiliated herself in front of lots of nice men who got to watch her do it. Have a tiny bit of sympathy for her, she is a Peep after all and doesn't have the heightened senses us cats do.
Marty

Mommy says the important thing to remember here is that young, virile, and possibly handsome firemen came to her aid!
Oh yeah, that and she didn't get hurt really bad. Heh-heh.

My momma wants to know if da firemens wuz cute. I are just busy laffin.

It's all about her? Perhaps she's taking lessons from you, Spitty!

OUCH. That must have been quite a sight. Especially with the Thundering Herd of Firemen. Did any of them carry your Human to the sidewalk? ;) Wooooo. Probably better the Firemen who saw the whole thing unfold than her entire class...that would have REALLY hurt.

We are sending healing purrs for her poor bruised knee.

Grandma told us how Mommy, as a child, angry because Grandma didn't want to buy her candy, walked off in a huff, only to slip on the slippery floor and right into a drain that was filled with liquid filth. Grandma says she only just managed to grab Mommy by the arm before she sunk completely into the filth...Now, if that happened today, THAT would have been really really embarrassing. Not to mention STINKY.

That will be clumsy humans for you. LOL how funny the firemen stopped to help. My peeps would be red faced which surprising as she does it that often you think she'd be use to making a spectacle of herself. Have a fabulous Friday.
Best wishes Molly

OMC OMC your poor human! That is AWFUL!! THANK COD she seems to be ok!!! The bright side? HANDSOME firemen rescuing the damsel in distress!! xoxoxo

Oh my cod! I feel so bad for your mom. I can only imagine how embarrassed she must have been! Then all the (notoriously young and good looking) firemen run to her aid? Bliss... she didn't require mouth to mouth? No fainty spells? Too bad. Help her out today and be a good Mancat. I'm certain there my be xtra loves for you today. And I send gentle head bonks to her.
Xoxo
Ms Stella O Houligan

I'm sure the ibuprofen will help your mom's knee , it's the secret weapon of my momma too. My mom always does embarrassing things, fortunately by now firefighters were not inlcuded... butt things can always change...

Oh noes Spitty we are so sorry to hear about the fall and we are so glad that your human only has a bruised knee (and bruised pride --oopsie)! Glad to hear she was "rescued" by those firemen!

Hmm, sorry, can't get the image of four fireman racing to the rescue! Worth a moment of embarassement, imho. Spitty, you spread some of your royal catly charm and your momma's knew will heal up nicely. Take care of her, Spitty!

We did see a video just like that on Facebook Spitty. Just kidding, and we're sure glad she wasn't hurt bad.

How nice of the firemen to rescue your mom-did she say if they were cute? I am glad she didn't get too injured.

well the firemen were at the right place at the right time there. humans need four legs if you ask us. our mom always yell at us when we play ring around the leggy with her legs while she goes down the stairs. humans, what are we going to do about them?

pee ess, our human sends hugs to your humans and sugggests chocolates to cure all that ails the human specie.

We are not laughing at your human we are laughing with her. Glad she is ok. Our Lady's question: Were any of the firefighters good looking?

We are very glad your human is okay! Lucky for you, her fall didn't cause injury that would interfere with her catering to your every whim. Lucky for her (hopefully), someone didn't film the fall and post it on youtube .

We can't believe the fireman didn't have the wits to get this on Video. How disappointing.

In OTHER news, OUR Mommy slipped on a pile of yak today and came down like a LOG. It was EPIC!

Aaaaw So sowwy mommy's dun dat afur and it's no fun she sez. Weez be purrayin' fur all da bwuises includin' da ego. :)

Sorry your mum fell down! Hope she wasn't hurted bad. But mum wants to know, were the firemen cute? Get any phone numbers?

We're sorry your human fell, but our mom bean is busy fanning herself at the thought FOUR firemen came to her rescue. Are you sure she didn't do it on purpose?

I’d certainly never do that. TW did something similar a few years back at Pathmark. She failed to notice one of those DANGER signs laying on the floor. She stepped on it and began body surfing down the aisle. She would up banging into someone’s cart and tumbling and rolling down the aisle. The peeps started joking that now Pathmark has No Aisle Surfing signs. I hope your human feels better and her knee doesn’t continue to hurt.

Four firemen huh. Well, if you HAD to fall at least you had four hunky firemen to help you. I'm glad there was no major damage done to anything other than pride but now you have four new friends....

Were any of the firemen cute?

Wow, four firemen is kinda like getting the pick of the litter - but only if your mom wanted to. I hope she has a calm and relaxing weekend!

Mom feels so sorry for Mom Mary. She has been in her situation on more than one occasion, but she never got help from cute firemen. She did fall on the tarmac at Charlotte airport years ago, and the pilot took her in the terminal and bandage her knee and her pride. Hope your mom feels better soon. And remember, you were off having fun at Cat Scouts! XO, Lily Olivia, Mauricio, Misty May, Giulietta, Fiona, Astrid, Lisbeth and Calista Jo

OMC! And she still let you go on the Missississippi trip - were there too many sisisis? Anyway I hope she's better by now - The Staff in particular is anxious to know. Something to do with fellow feeling!!! Why's it all about them, eh? MOL

Where are the cute firemen when our mom trips & bangs & bumps herself?