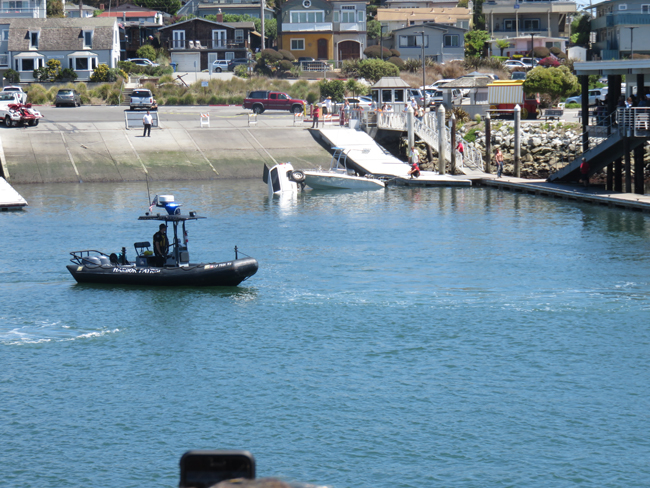 Hello, Kitties and Humans! Examine the above picture carefully. Do you see anything amiss? Take your time, now.

Spitty will hum a little tune as he waits.

Time's up!  Yes, now you see it: A Stoopy Human (and really, is there any other kind?) drove his car right into the Santa Cruz marina as the Human and her equally ancient boy cousins enjoyed their brunch.

The Stoopy Humans and their dog had *just* enough sense to escape the car before it sank.

We spotted the evidence - a true humdinger of a fail!

Humans never cease to amaze me...

OMD! That is a stupid human. There is an episode of the Office where a car gets driven into a similar place because a GPS told it to.

OMG, so glad that everyone was safe after that.

What a stoopid bean! We guess he didn't see the water, MOL. Mom bean says she thinks he's learned a furry expensive lesson.

That was major stoopy!

Oh my mouses! You think that stoopy human mistook his car for a boat?

Aren't you glad that you chose to stay at home and nap instead of joining the others for brunch?

A couple of years ago Mom saw someone do that at the causeway here......Humans just aren't as smart as we are!

Before I noticed the car, I also noticed the lack of kitties - that's another thing that's wrong with this photo!

We see a car tryin ta drive on water. Is that what ya meant? Too bad about the woofie though...

Good grief.....humans can truly be ultra-stoopy can't they? So happy they escaped before becoming food for the water creatures but good grief - things like this just remind me how glad I am to be a cat.

The other thing wrong with this photo. NO Spitty! XOCK, Lily Olivia, Mauricio, Misty May, Giulietta, Fiona, Astrid, Lisbeth and Calista Jo