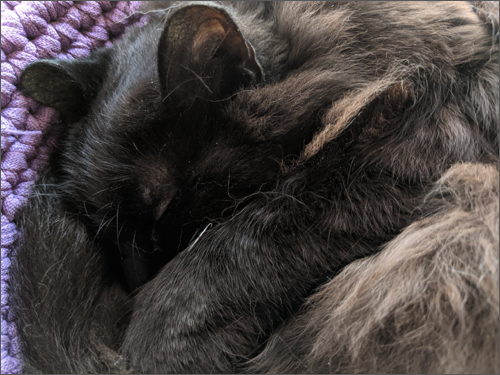 We were on a roll, were we not? And then came Thursday.

The Human and a friend took lunch out to Fort Point to enjoy the sun and crashing surf. And all was well until...the stoopy Human climbed over the chain to enjoy a stroll along the sea wall and the delightful view of the underside of the Golden Gate Bridge.

As she climbed over the chain to return to the parking lot side, she failed to accomplish the most basic task of lifting her trailing foot high enough to clear the chain, thus catching the toe of her shoe on the chain and taking the kind of fall that haunts Old People's nightmares!

After much drama involving the aforementioned companion, a Bridge Patrol officer, a small crowd, a former marine medic, and the sweetest Weimaraner ever, her loyal best friend and former college roommate arrived to save the day, ferrying the Human to urgent care, the lunch companion to his home, and even fetching the Human's insurance cards from her apartment.*

In the end, after a thorough once-over, x-rays, and some very tidy stitches across her left knee, the Human got home safe-ish and sound-ish, and extremely uncooperative with my efforts to make her blog for me. Even now, I have to tell her story, rather than my own tale of deprivation: little attention, almost no hallway playtimes, and irregular food delivery.

Other than her occasional whimpering and tendency to walk like Frankenstein's monster, we are getting back to normal and hope to resume communications in the next few days. How stoopy is my Human, anyway? Does she think she's broken her fingers??

*Tip for all: Carry your insurance info. This goes double for Humans as stoopy and apparently clumsy as mine.

I hope your human heals fast! My human's insurance card is permanently in her wallet.

I am very concerned to hear about your Human's accident, Spitty. You must have been worried sick that she was never coming home to feed you on Thursday evening. How close to starvation were you? And who's going out to fetch fresh lamb hearts and snapper and all manner of other yummy treats for you?

Now that she's at home - resting, I hope, with her leg up - why oh why can't she spend hours every day helping you with your blog? I don't get it!

I am sorry your human had a nasty fall and hope she heals well and is soon feeling better.
You could give her some snuggle and purr therapy. I promise I won't tell and spoil your street cred.

Yike! We are sure glad she is okay and we're glad it wasn't a lot worse!

OMC, Spitty. That is so scary! We sure are glad your human is going to be okay. We're also thankful her injuries were not worse. Our humans always carry their insurance cards with them, just in case! Hugs and purrs. XO

sound like somefing my hooman wood do. , hope she heals fast.

I'm sure the view there was almost worth it ... no ??? LOL
Thank you for using your time/words to explain her story.

Spitty it must have been agonizing knowing that she was injured, and would not be on time with daily attention to meals, treats and attention. We need to keep them on a tight leash and remind them that they are not, after all, cats

I was going to write to you today to tell you to light a fire under your human. I am sorry she got injured, I hope she heals quickly. XO

Pffft, if she didn't break anything, is it even worth mentioning? Neat and tidy stitches? How about extra pounds of boot for broken bones.

Oh no! I'm so sorry your Mom went through that, I'm glad nothing was broken and no surgery required. Stay strong Spitty, your schedule will get back to normal soon.

So in other words with all the blood letting it was just another day around the house then? Honestly they can be so delicate. We hope you have all the peacock tounge pate and hummingbird wings stocked up. No reason she can't order in for her own gruel. You don't both need to suffer.

That had to be a bad ouchy! We hope she's better soon so she can attend to all your needs! Mom carries her insurance card in her wallet.

Oh no! We hope your human is feeling better and heals up quickly. Was she late to feeding you, Spitty???

YIPES! It sounds pretty bad (the fall AND your lack of required attention from the Human) - but it could have been worse. Imagine if she'd broken something - the attention deprivation would have been WORSE Spitty. Do you think she might take that accident as a sign that she has not been paying proper attention to the feline in the family???????? Maybe?????? Good luck with that.

Yup! Humans are not as agile as we cats! Still, I bet it was scary when she took a long time to come home. Bet it is hard for her to get around too. At least she will be at home for a while ;)
Purrs she will be OK and hear well!
Purrs, Julie

Our mom is duly horrified at your human's accident and is glad it wasn't worse! It's probably good that you weren't there, though--can you imagine the embarrassment you would have felt in having folks know you own such a spastic human?

Spitty that happened to our huMom and she broke her kneecap, so we are glad your Mama was not any more hurty ! Please take good care of her !

*taking notes*. Ohhhhh that so sounds like Mom L! I e got her insurance card in my Fanny park now. Thanks for the heads up Spitt. Oh and healing purrs for your human.

Oh my goodness Spitty! What a terrible accident. Very glad it wasn't worse. You should thank your lucky stars it wasn't much worse. You would be wise to remember from whence your food and warm pets and lovely play come. Wish her the very best from Savannah, Sage, Katie, Linda and Peter who just had nine stiches removed from his right knee. Your human and he would make a great pair!

Crivens! Such drama and so much OUCH. You have our sympathies and a lot of get well soon wishes!!

Oh, good grief!
Stitches too...that's a pretty good job of busting herself up, Spitty!
What did the Russian Olympic judge award her for composition?!?

So sorry for your human's accident. Hope she's mending wonderfully. In the meantime, do you want us to send our servants over there to take care of your needs?

We are constantly amazed Beins walk at all, just 2 clumsy feet and basically falling forwards all the time. But that gives them thumbs, and we appreciate that. We are convinced that Bast created them for us.

AIEEEEEE!!! I never let Mom L outta the house without her insurances card thingy. She’s so old!! We gotta snoopervise’em like kids Spitty