The Kitties Who Came Just Before Me 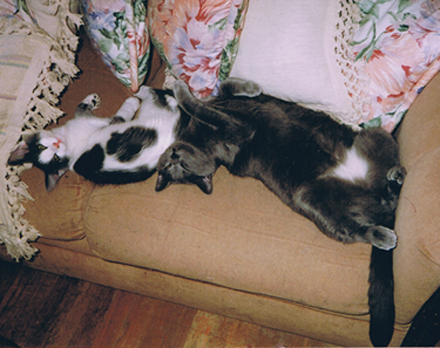 Although I like to believe I am her One and Only, the Human tells me often that there were many, many furry companions that preceded me.  Above are two of her favorites!

The big gray boy is Mr. Teeth, who, she says, was the Nicest Boy In All The World. He followed her around like a puppy and she could make him purr from across the room just by looking at him. His little sidekick, who did not stay little for long, is Clarkie (named after Will Clark, the Giants' first baseman in the late '80s & early '90s).

They were special boys who will always have a place in her heart even though they were not as good as me and mine, too.
Posted by Spitty-the-Kitty at 6:59 AM

Your Mom has a gift for great cat names. Just sayin'.

How adorable! Thanks for sharing those loving memories Spitty!

The lauded Mr. Teeth! And Clarkie! The Toofster looks just like our Angel Brother Dusty...he was a loverboy too. How did he come by his name? Spitty, tell all!

Aw, we never forget those who leave pawprints on our hearts.

They look like great kitties! Isn't it nice to remember the cats who came before with love.

They look loving and sweet and your mommy honors their memory. YOU are now the one and only. And just as loved. Check out the cabinet with the Gerbers...that says a lot. ♥♥

I can see why your human loved those kitties; why my human worships the cat before me, I don't get as much, because she was semi-feral, had a mean streak a mile wide and killed other creatures on a very regular basis. She was also very loyal but sheesh! You would NOT want a cat like that to be UN-loyal!!

They both look adorable !!! But seriously, I think you are the best , Buddy !
xoxo

Truly? There are other cats out there besides US? Surely you jest! Those two are quite adorable, but lets face it Spitz, YOU truly are This Cat's Meow!

Awwww they look so sweet!! Mr. Teeth looks like one of my boys, Goro. He wears white fur in his belly area too.
They will be in your human's heart forever. And how nice you have a place for them in your heart too. Thank you for sharing the story :-)

They are both absolutely adorable!

Mr. Teeth! What a great name! I bet he was good at treating things to a toothy death!

Great post, Spitty. We think it's nice that you honored them by sharing their memories. :)

It's nice to remember the ones who came before.

It's nice to look back and remember our furr babies from the past, and don't worry Spitty, it doesn't take any love away from you. There's plenty to go around. have a great Sunday

Precious photos of adorable Mr. Teeth and Clarkie; you know what Spitty=Mommy says those that came before help her to love us more because her love for them is the foundation of her love for us now and then some!...She says real love keeps multiplying, it never dies...Always loved, never forgotten, Forever cherished...Happy Sunday and have a fun week ahead, wonderful friend...xoxo...Calle, Halle, Sukki

It looks like Mr Teeth and Clarkie were real good friends, too.

Thank you for sharing Mr. Teeth and Clarkie with us ♥