Remember her?  Well, Kitties, at my urging, the Human accepted a dinner invitation from the neighbors in order to investigate this irregular situation (well, and because she likes them, and because they're good cooks, and because, well, they barbequed! Mmmmmmm.)

So, over the long weekend, Eleni's pawrents dropped her off to visit yet again. The Human did not get a really good frontal close-up, but here's the best she could do: 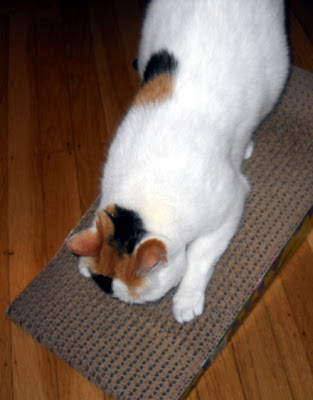 The permanent resident is Onyx. So, were we separated at birth or what? She's a lot nicer than I am, though. Here she is enjoying her dinner (well, sort of enjoying. The Human thinks she was extra alert for the appearance of The Intruder to disrupt her peaceful dinnertime): 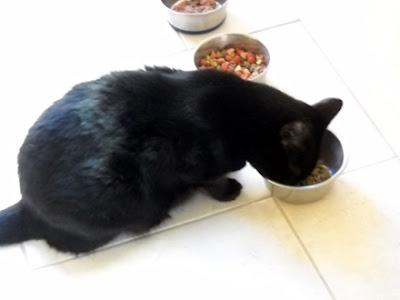 Finally, here they are in the den just as the Human was leaving. As you can see, Onyx's lasers are locked and loaded. We think she was a happy girl that Eleni was slated to depart on Monday. 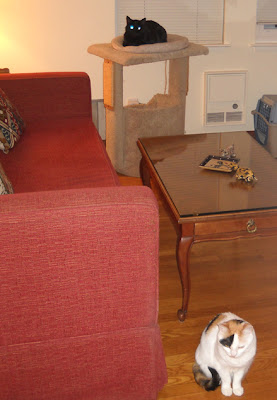 Posted by Spitty-the-Kitty at 6:14 AM

They're both lovely-looking ladycats!

But, the most important point of all: Did your human bring you back any BBQ leftovers?

But how hospitable Onyx's pawrents were to make Eleni comfortable. And you as well. You didn't make a fuss (did you, Onyx?) over Eleni.

You're lucky you have cats for neighbors, Spitolla. We have a dog next door to us.

They are really a nice looking bunch Spitty. I agree with Raymond and Busby, we have two little woofies as neighbors...although they are fun to watch too!

I hope they gave you something from the BBQ. Our parents promised us burgers from the one they went to but forgot. :(

Yeah, Spitty...like Ray and Busby said, our neighbor is a woofie...one of those yapping Boston Terriers that likes to come in our yard and poop and chase the squirrels. At least your neighbors don't come over and poop in your house.

Well Eleni must get dumped....er....dropped off over there so much she is used to it now. But we are glad Onyx is ever on the cautious side. they both look like great cats!

Spitty! Us guys are coming over to be voyeurcats. Your neighbor girlcats are HOT!

Oh, and the girls here think your "rationale" is rather, erm, lame. They are devising suitable punishment, i.e. tooth polishing, claw sharpening, etc.

I get the feeling that Onyx was not consulted about Eleni's stay at the neighbors!

Spitty-the-Kitty, we finally get our lazy mom to visit, and there are no photos of you. Hmph. Well, it's off to your other posts then. Oh, we do guess it was kind of you to share your blog with your girlfriends.

Spitty
Now why were you not invited. Two nice looking lady cats and you ... that would have made for a very interesting evening...plus the BBQ!

Those kitties are precious! I have always wondered what Cody would do if he had kitties visit him. We have other doggies visit us and he is in the middle of the action all the time. Wonder if he would be hospitable to other kitties?

Wow, Spitty, two furry nice looking girlcats! Did you get any leftovers from the BBQ? Dat is da real issue in my opinion.

Spitty, my friend, Too bad for me didn't see your purrfect face today, But I think I do O.K. much more than Miss Athena...ha..ha..ha..Wooaw !!! Spitty got crush again..heh..heh..heh

And Your neighbor girlcats are gorgeous !!! Now I know why you always looks up at the window : )

What nice friends! Did you get any BBQ?

Aww, Spitty, Baby loves you too! She's just shy to admit all her crushes. Doesn't want to appear "easy". She thinks you're devilishly handsome and sleek.