I love my cube. Sometimes I like to act out my own little version of Das Boot. You might not think it to look at me, but I have a really good imagination. 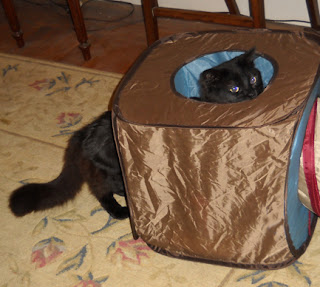 *      *      *      *      *
P.S.  Thanks to all the beautiful LadyCats who came over yesterday to play fevvers with me. It was spectacular! You wore Spitty out, MOL! And a few of the guys even dropped by later to chillax with some Nip. It was a good day.
P.P.S.  Today marks two-Count-'em-TWO-years since the Human had a cigarette. She hardly ever bites my little head off anymore, or at least when she does, it's not because she's jonesing for King Nico--much.
Buh -

Yay for human! We luf that cute lil head pokin out of the cube! Have a pawsome day!

Cubes are FUN! Even Fuzzy likes them! And congrats to your Human - ours has heard that even after 2 years of quitting, King Nico is still tempting, so even more props to your Human!

Spitty, you crack us up! Love the pic today!

Huge concats to your human for making it through 2 years without smoking. That's fantastic! Our mom wishes she could say that about sweets/pastries. LOL.

Spitty, my Mom is SO PROUD of your Mom for giving those caner sticks the boot. My human brother is trying to give it up, but it is hard. He has cut back lots but Mom is so mad he ever started.

Spitty, you are sure having fun in your cube - very cute!

Concats to you mommy. MY mommy has made it 7 years!!!

I understood about your having a harem of Lady Cats...after all..I sail to many ports. However, the chick-hen awaits with an aperitif of half and half.

Hooray for cubes, and hooray for your Mom!!!

Paws up to your human for her two-year not-smoking anniversary! My human quit before I was born - when she started exercising regularly, smoking stopped making any sense to her! So I have never had to suffer a lung full of that icky secondhand stuff!

We love our cube too but never thought it could be a submarine too. Great idea!

And grats to your mommy. That is such good news. Our Mommy has been without a cigarette for over 20 years so she knows how hard it is.

Concats to your Mom for not polluting the air your little kitty lungs take in for 2 whole years. That stuff ain't good for you either; in fact I'm surprised YOU didn't go thru withdrawal too. I hope to join you in another game of fevvers soon. Maybe I'll bring one of my special peacock fevvers.

13 tails up to your Human! Our Mommy fought and won the battle against her beast, too, many years ago.

Spitty, that cube thing looks like a very interesting time passer. And congrats to your human for kicking that nasty habit.

Spitty our mama says prolly why your human totally got rid of nicotine is that she must be sneaking some nip from your stash instead. Nip is more powerful than nicotine, we cats know taht :)

Spitty
That is super great your human was able to break that habit. She is to be commended! It will save her health!
And we know how wild your imagination is Mr Spitty!

Wow, two years! My mom knows how tough it is--she quit earlier in the year but then only needed an excuse (which apparently she got). Sure, at first it was just a few, then more than a few, then back to where she was. She's worse than a niphead!

Oh well, she'll try again. She says when it's 110° on the balcony it kind of takes the fun out of it.

Say, do you know you can pounce on your cube and flatten it? That's what I do with mine.

Two years is amazing! Concats to your human! They say that's the hardest thing to give up.

I love my cube too! Maybe I can drag mine ofur to your house and we can play submarines togefur.

I love my cube too! Mine's red.
Shaggy is too fat to fit in the hole and Scooby is afraid I'll pounce him if he goes in there (he's right). So the cube is all mine and it's great! -Scout

"DIVE! DIVE! DIVE!" oh wait. You needz to be over here! I would lubz to play in yer box! heheehheee *ebil grin*
ahem!

Anyways; a HUGE Concatulations to yer slave! My slave knows excatly how hard that was. THREE CHEERS!!!
HIP HIP!

That is one multi-purpose cube, Spitty! And congrats to your human for kicking the nicotine habit. Guess she's not so bad afterall....

Mr. Spittola, we all need our fantasies, so we won't hold theese one against you! Congrats to your Human for being a non-smoker (that is a tough one to kick)! (PS: Thanks for your well wishes...and dressing up in the tuxedo was alright, I'z quite easy going when it comes to that!)

Sorry about that Spitty I was at the beginning of the comment and blogger just entered the incomplete comments.
Cubes can be used for many proposes, have you tried to be an explorer with your cube by digging around it
Concats to your Mom two years without cigarettes.

Spitty, I think you look so funny in this picture..It look like a Split Body Magic Trick..MOL

And Concat's for your human ! No longer to bites your little head off anymore..Ha..Ha

Ha!! Your own version of submarine races to lure those ladycats in. Congrats to the woman for kicking the cancer sticks.

Hi Laura, Thanks for visiting. I saw on your profile that Jet went over the Bridge in December. I'm sorry for your loss. I bet he was a very cool cat--great name! XO, Spitty

Great cube werk. We sometimes use ours, but not when the camera is around!

Your cube looks like it is sooo much fun! We has a cube - somewhere....
Concatulations to your Mom for quitting. Our Mommy was homicidal when she quit 11 years ago! She even yelled at me!!!
BTW - yous the first cat who noticed me and Kozmo was having a hissy conversation. Yous wins the first prize in the countdown to our 1 year blogaversary contest!!!
Email your snail mail address to penelope (dot) catfromhell (@) gmail (dot) com
and me will send yous some Cat From Hell Swag!!!
Kisses
Nellie

After reading everyone's comments I am ashamed to say that I am still smoking. How did you quit?