I was relaxing in my Tower last night, gazing idly out upon my Kingdom,
contemplating my post-prandial plans: My 'Vine pillow? A nap? Both?

Suddenly, from out of nowhere, a sign appeared from the Southland: 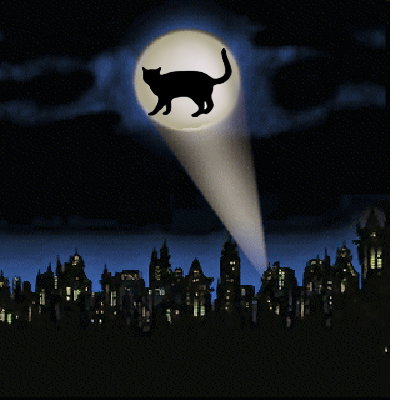 Yes, CatMan aka mild-mannered King Spitty was being urgently summoned!

Without wasting a single moment, I sprang into action and fired up my Transporter: 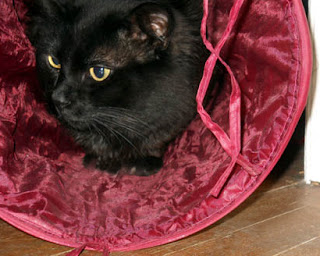 After a perilous night's journey, I emerged here: 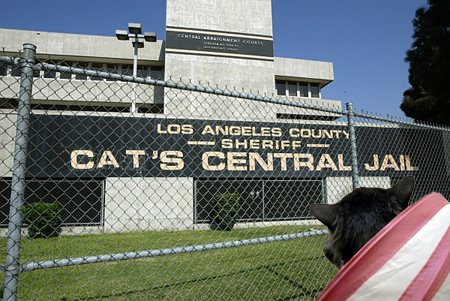 Using my Ninja skills, I crept inside, knowing my Tunnel would safely protect our getaway vehicles.
I found my Ladycats in Distress Hissssssing Mad in their individual cells. 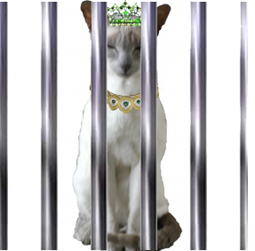 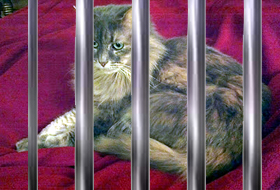 It was a piece of cake for Nellie to slip through the laughably ineffective bars,
but Sassy got stuck, so Nellie slipped into her cell and pushed while I pulled from the front.
It wasn't pretty, but in a flash Sassy was free, the Sheriff was bleeding from dozens of slash wounds and we was outta there!

Fortunately, I had packed three of my Buddy's Best Bikes,
so soon I and the Felonious Felines
were zipping down the Hollywood Freeway to the Beverly Hills Hotel! 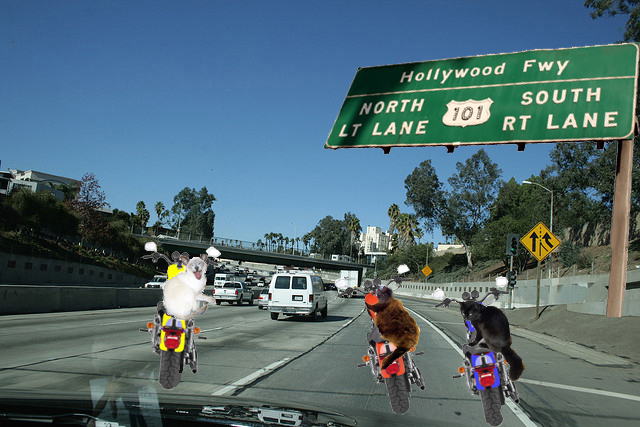 When I left The Girls, they were sunning themselves by the pool back at their Hotel,
completely unrepentant!
They begged for Niptinis, but The King nixed that idea,
as they'd proven themselves untrustworthy even when sober. 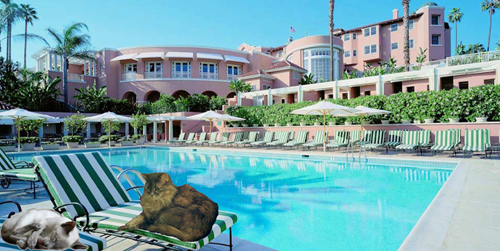 Who knows, though.
I'm guessing between the two of them, they won't have much problem finding a ManCat
to buy them a drinkie or six.
*     *     *
CatMan would've stuck around to chaperone the two miscreants,
but he received an emergency call from Japan:
Seems that Some Kitty needed urgent assistance getting unstuck from his favorite box!

It only figures those two would be crossing my street when the ONE cop assigned to my district was around!

Spitty,
Yous my hero! Me is sooo happy yous has come to my rescue! Now me is off to Michigan to gets some Rs and Rs before me goes home. Me has left Kozmo in Hollywood with Sassy and Callie - me hopes theys gets along!
Again King Spitty,
lots of Nellie Purrs and Kisses

Thank cod you came to the rescue. Surely those two shouldn't be left to their own devices....

Spitty, thank you for rescuing me - I was afraid I was going to have to learn to sing jail house blues!

P.S. About me not being able to slip thru the cell bars - I am fluffy, not fat, plus, I am pretty sure my bars were closer together than Nellies. That's my story and I am sticking to it!

Good job Spitty, freeing those two ladies. We are so glad they are all right.WE are so proud of you King Spitty. Take care.

Spitty, you da MANCAT! You were on the scene in a flash of transporter sparkle dust and freed those two unrepentant girls. I hope that was NOT Sheriff HARLEY slashed to ribbons?

Rhank goodness you were there so quickly to ssave the day!!!

King Spitty, what can we say? You are da mancat!

Thank goodness you knew just what to do. You're a hero, my friend. A true hero!

Oh wow King Spitty, that was amazing! You need a cape too...in addition to your crown.

If I knew you wuz doing sooperherocat things I wud haz gotten mai cape an joyned you!

Maxwell: DUDE. Who was that masked cat???

We agree with the King. NO Niptinis! How will you ever get Maru out of his favourite box...err which favourite? :p

We love how you made your getaway on those bikes! Good thinking and easy to get through the tunnel too.
We hope when you were able to find some down time you relaxed a good long time with the 'vine.

Good thing you've got that tunnel!

Holy Litterboxes, CatMan! That was some good rescue werk...

You know what they say, it's not fun in LA till you been in klink! Best times are when you go in with furriends!

Spitty -- who knew?
A supercathero!!!

Oh my goodness, I love love love this story!! You are such a cool superhero, much cooler than Batman!
And you rescued two ladies. Whoo hoo!
The picture of three of you riding bikes cracked me up!
I look forward to seeing next episode of CatMan!

Watch out for that Nellie, Spitty...she's gonna get everybuddy in trouble!! Hey, we liked your bikes!

Wow Spitty, you're amazing! I hope I can count on you if I'm ever in distress?? ;o)

Spitty!
YES!
We are so with you on the Road Trip offer. Bring lots of 'vine 'cause Shaggy weighs 19 pounds & it takes a lot to get him vined up good!

Our hearts were racing! What an exciting life you have! A couple kitties here would have had a hard time squeezing through those cell bars.

Holy mancat! Spitty, a king *and* a supercat? How does catman keep up with that *and* all the lady cats? You sure your tunnel is not also a time machine.

Wow! We never knew you were CATMAN! Good work rescuing the ladies.