A Visit to Mrs. Grossman's

A couple of weeks ago, the Human and her friend visited the Sacred Holy Site of Mrs. Grossman's sticker factory.
Perhaps I have not yet in Lo, these six-plus years of blogging, spoken of the Human's obsession with these shiny little paper items?
Well, she believes she has played a major role in the flourishing sticker business over the past 25 years or so. And Mrs. Grossman's are the Epitome of Fine Stickers.
Imagine her joy when she discovered the factory was located in nearby Petaluma, a mere 40 miles north of the City by the Bay!
She and her friend, who graciously agreed to accompany her on this quest of a lifetime, paid their $7 fee and set out happily on the tour. That the rest of the tourees were little girls below the age of 11 bothered her not at all, though her friend occasionally looked as though he might like to disappear into one of the mighty sticker-producing machines. Nevertheless he soldiered on, bravely taking photos of the factory's Great Sticker Timeline, as the Human had stupidly forgotten her own camera. (These will appear eventually--the pictures below were taken in our very own living room).
After the tour, the visitors were escorted to the most stupendously wondrous sticker shop ever, where she managed to spend $39 on more stickers (that's $39 perfectly good green papers that could have bought me foods and toys and treats and important stuff!) It was, in fact, so astonishingly extravagant that she qualified to get her $7 for the tour refunded.
Life just doesn't get any better than that, does it now, Kitties? (Cue sarcastic laughter) 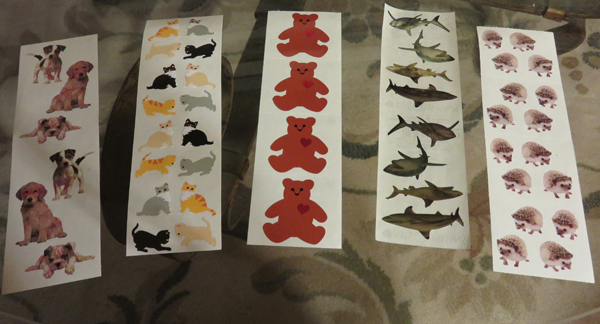 Okay, Okay. These were some of the freebies given out on the tour, so I can understand and accept the woofies, fishies, etc. 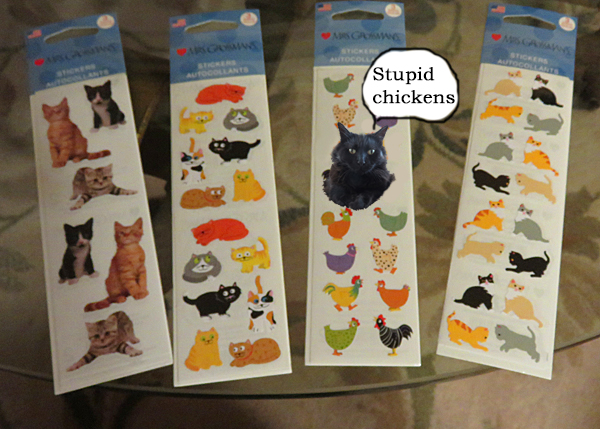 But these are some that she purchased. So what's up with the CHICKENS, Human? Shouldn't ALL of these be kitties? I mean, you forked over some of our hard-earned CASH for these. Chickens? Really?

Wait, and she got DOG stickers too? Hm!

Well, here's the thing, Spitty. Your Human is crackers about stickers. Heaven only knows why. But the array of pusscat stickers is, - well, let's be brutally honest here, shall we? - not really all that exciting. I mean, she's got King Spitty at home to admire and it's always going to be the case that nothing, not even the very bestest pusscat sticker in the whole wide world, is going to compare favourably with your fabulous self. So, yeah, she bought some pusscat stickers but it's understandable that she also tossed in some chooks, if only for light relief.

On this occasion, I'm voting that we give her a break. (I'm assuming, of course, that having spent more green papers on herself, she didn't forget to buy you an extravagant gift, did she? Or, at the very least, bring home another wonderful box for you to nap in? Assure me that this is the case; otherwise, all bets are off, there's no quarter given, and you have permission to bring out the claws whenever you're up for a bit of a tussle.)

Chickens? Chickens? The only good thing about chickens is when they are cooked up nice and tender and presented to US on a silver platter (or ceramic bowl) for our eating pleasure. Chickens = food! Did she bring you ANYTHING from this foray to sticker nirvana? After all you've been through with the great war of the fleas, to come home with a pile of stickers and nothing for THE KING is rather an insult. Truly.

Spitty, not only seeing your comment about the chickens there, was purrfect but tell your momma that she totally made my entire rest of the week with this...well, you AND she. xxoxooxoxoxoxoxox

Humans are weird, Spitty...you must accept this and move along. However, if she sticks any of those stickers on your furrs, then you use your royal teefs! Something tells me that she knows better than that...

Oh, I understand, Spitty. I'm very much a cat person, but I love chickens, too! Chickens are such fun to watch and baby chicks are such adorable little fuzzballs :)

Heaven...that's what our mom says. She adores stickers and has been collecting them for years and years (cats, bears and pandas). Like Mom Mary she wouldn't have been embarrassed to attend. Our dad would probably go along...after all he does go to BlogPaws with her. She cannot wait to see the photos from the tour. XOCK, Lily Olivia, Mauricio, Misty May, Giulietta, Fiona, Astrid, Lisbeth and Calista Jo

Oh, those are ADORABLE. Okay, maybe not the chicken ones but wow! Those are pretty cool!

Lady collected stickers in the 80s. They use to trade them on the playground. She says those are lovely stickers.

My first thought was why aren't they all cat stickers too.

O.M.C. Our mom has some of those Mrs. Grossman's too!!! She treasures them like they're gold or something.

Whoa! TW has never been into stickers but thinks she has some of those cat stickers. We had no idea who Mrs. Grossman was except something about Bob Dylan and Woodstock or something. Oh, and Pop had a Mrs Grossman as his 2nd grade teacher. Even though with the $7 refund, she really only spent $32 on stickers but she could have bought you a small Armarkat cat tree with that.

Great. The mom hadn't heard of Mrs. Grossman's stickers before. Now she wants some.

If she was buying chick-hen, it should be the kind you can eat!

TBT says he gets enough darn stickers on his fresh fruits...