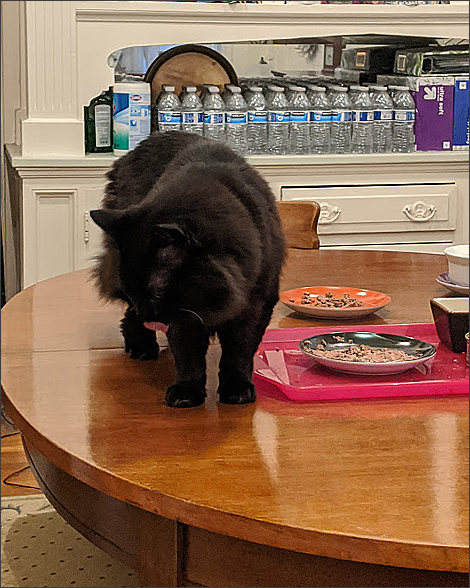 I've always been kind of a svelte boy, and now that I am officially ancient,

I am even skinnier. So sometimes, if I don't eat my dinner right away,

the Human gets all worried and opens another can of something

she hopes I will like better. And sometimes, I like both and I eat both of them,

and sometimes I was just foolin' and like the first one just fine,

and sometimes I don't want either. She hates that! Let me tell you a secret, Kitties:

There are times she has opened a *third* can, ha ha meow! Score!

Note:  As you can maybe tell, we are having trouble with the new blogger. Grrr. Was it broken? Did anything they did make it better? No and No. Most of our troubles are spacing- & alignment-related. I think she is capable of figuring it out. Eventually.

Oh Angel Sammy used to do that in his later years - he'd refuse some can of something so I'd open another and another until he WOULD eat...after he'd finish the one that got his approval he'd eat about half of the others. I was so desperate for him to eat I let him "graze" !!

A kitty should always have choices! (P.s. we have trouble with the new blogger, too. Especially with photos.)

My human has been there, done that with several kitties! Boodie, who is 19, however, is NOT one of them. Fortunately her appetite is fine... although her eating schedule seems to change from day to day.

It's good to have a choice, Spitty.

I am glad she caters to you. Tell her to get you some Fancy Feast kitten food, it comes in 4 flavors. Our vet told me to feed that to Polar Bear to help him gain weight and Jinx likes it too. XO

That is masterful staff management, Spitty - it appears that you're starting to get the hang of it after all these years!

Not a thing wrong with multiple meals Spitty, the joy of the can popping alone is worth it!

I have not seen the new Blogger but I have heard plenty of 'stuff' about it!

Spitty, isn’t it fun to keep our humans guessing??

Double dinner sounds good to Ava. Gracie, who is 20, is more of a challenge. She is 20 now, and does not always have a good appetite. But back in the day, she would have been down with two dinners. :)

Wow, you sure do have the meal plan all worked out. I do something like that, but have never managed three variations! MOL
Have a great week.
Purrs
ERin

Sounds all too familiar Spitty. We humans do so worry about the eating habits of our furry friends. Got any advice for us?