Why I Am Forced to Hang Out in the Baffroom 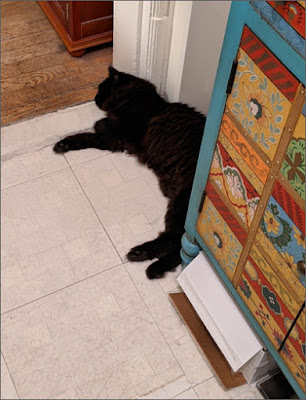 So, as some of you may recall, last March I had a pretty big, pretty bad seizure, the cause of which was never identified with any certainty. I am pleased to say I've not had another in the ensuing (nearly) five months.

So, you may well ask, what does this have to do with my hanging out in the bathroom?

Well, all on her own, absent any medical confirmation, she came to the conclusion that maybe part of the problem was that I had lain too long mere inches from the radiator and fried myself somehow. (Yeah, I know, I don't think so either.)

But she decided from that night forward, the radiators are things of the past. My comfy little hammock was removed and that was that. She decided she would just wear extra sweaters and stuff, and I, after all, had my furs.

That was fine--for *her* as she has lots of warm clothing (and, I would delicately point out, a layer or six of body fat). I, however, am quite small and slender under my glorious furs, and had to somehow make do.

Well, this is where the bathroom comes in. In the very spot I am lying upon, the floor is extra cozy warm, as the building's boiler room is directly below, keeping that little section of floor toasty warm, but not not nearly so fiery hot as the radiators.

And to be fair, she does supply many blankets. But still.

Friendly Fill-Ins: Our furiends at 15andMeowing came up with the first two and their co-host, Lorianne of Four-Legged Furballs, came up with the second two. I did #1 & #3 and the Human answered #s 2 & 4:

1. I like ketchup on the tips of my claws because it makes people wonder.

2.  Cilantro reminds me of soap, and yet I like it.

3. It pains me to admit I seek, rather than avoid, cuddles. I'm so ashamed.

4. I can’t read without falling asleep.

Hmmmm - that's an interesting theory your Human has developed to account for your little 'episode' back in March. I wonder whether she might have done a big of googling or, even, asked the V-E-T for advice? Another effective way to keep warm is to lie (or sit) on top of a Human, and if yours has lots of clothes on and some extra layers of fat, I think you'll find her particularly comfy. Give it a whirl at 3 in the morning and report back on your experience. I look forward to hearing all about it.

Spitty, never underestimate the power of a mother's instincts!
We are glad that you have not had a recurrence.

Not having a seizure is a good thing so whatever works Spitty. Keep warm pal.

Gosh Spitty - I say if that baffroom has a nice cozy warm spot then it's ALMOST as good as your previous hammock arrangement by the radiator. Almost. I also love your fill-ins particularly the ketchup on the claws thing - I've gotta remember that one for Halloween!!!!!

That warm part of the bathroom floor sounds awesome to me, Spitty.

We're having a heatwave Spitty, this is natural way to keep warm. Happy that no seizure so far.

dood...boiler heat iz way better any way, we iz glad ya finded that spot; plus ya can keep maintenantz on ther toez...ya noe....just due knot stak cheez slicez on de floor..

I am glad you have not had another episode and hope it was a one off.
I knew you could be relied on to find a good warm spot.

We are g lad you haven't had another seizure. One of our indoor/outdoor cats had a seizure sitting on the arm of the huMom's lawn chair.He was rushed to the vet and no one found anything and he hasn't had one since either. It is so scary to see though, so we appreciate your patience with us.

Are you trying to tell me your human has not gotten you a heated cuppy bed yet? I would be honored to send you Miss Esmes. I will wash all the tears out and leave somehow her furrs for you. Let me know. Xoxo

Sorry you had to resort to the bathroom to keep warm, but your human has your best interest in mind. Thank you for participating in the fill-ins, great answers. # 1 gave me a chuckle. Have a nice weekend. XO

Trade you. We'd kill for some cool. The heat *never* ends here.

Pee Ess. Our mom despises cilantro and says it tastes like flea collars, although we have no idea how she knows that.

Whew!
Wes has been having a heck of a time commenting on our furrends blogs. Wes thought things would be A-OK if wes just started a NEW Blog and used Nellie's email, but whoa! It has been difficult leaving comments.
Wes THINKS we has it all sorted now and so here we are!
And we are so happy that yous has NOT had a seizure in 5 Months. Hissy Old Licorice had only 1 and he was purrfect afterwards for the next 6 years. The vet chalked it up to be dehydrated and OVERHEATED.
We are crossing our claws that yous are OK for a ling time especially angel Nellie, Ms Stella and Esme. They wants yous to continue having adventures with the current ladt cats!
Purrs
Marv, Jo Jo, Kozmo, Cinnamon and Ange Nellie

So smart, Spitty! Our Angel Graphite used to sit on the same spot when he was in the kitchen. The tiles were warm from the refrigerator!

Keep the warm where you find it Spitty! We love your first Answer MOL

Ummmm....ahhhhh...Spitty, buddy, my fur pal across the bay. Why do you need ANY heat source over last week and next 10 days??? It is hot, hot, hot in our bay area. purrs, Savvy (hanging out in front of any fan available even with central air con)