Two weekends ago, taking advantage of the bright, sunny, cool weather, the Human and her friend took a stroll along the Embarcadero from the Ferry Building to the Giants' ballpark.
Here are a few highlights. . . not that the Human grew any of these things herself, mind you! 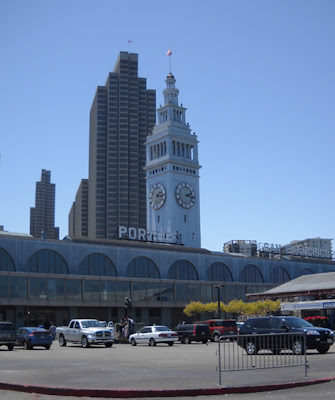 This is the Ferry Building. It has a clock. Whoo-hoo, eh? 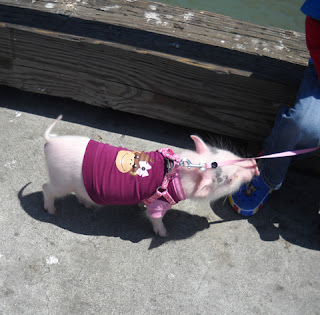 The Human and her friend met Daisy the Pot-Bellied Pig, a super-sweet little girl who let herself be petted and snorgled a little. Good deal *I* was not there. I would've wanted a taste.
(Can you tell sea gulls hang out on this pier??) 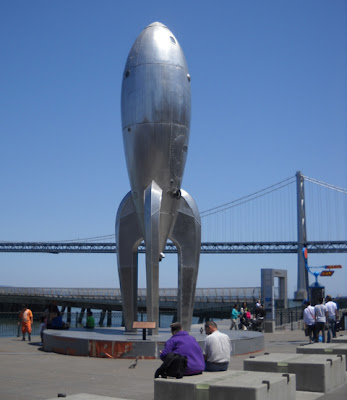 This is the Raygun Rocketship built by Black Rock Arts, those insane people who bring you Burning Man, which is something the Human might have enjoyed about 40 years ago. 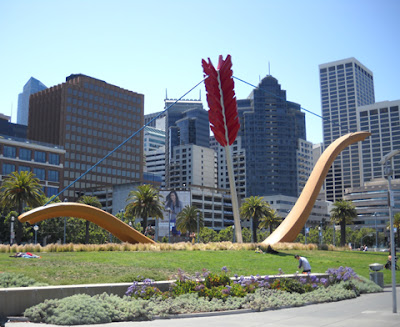 This is Cupid's Span, which the Human likes very much, an opinion not universally shared. 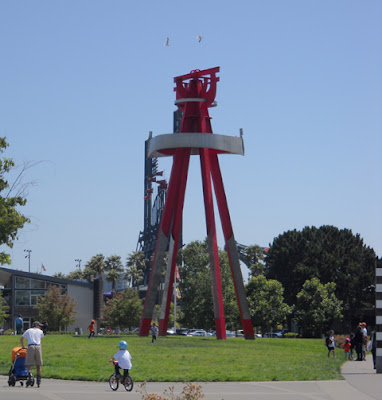 This piece is called Sea Change, a 40+-foot sculpture that's also a working weather station, which sounds good although the Human really has zero idea what the heck it does. 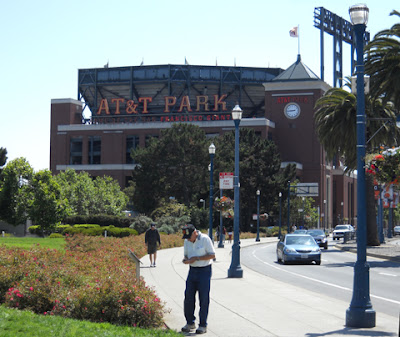 And this is where the Giants won the freaking World Series in 2010.  The Human does not expect a repeat any time soon, alas.

Now that our tour's over, who'd like to come on over & help me look for that tasty sweet little piggy? Just to make friends, of course.

Hmm, we could show that piggy he's our friend by washing him.. and giving him little nibbles! heh heh heh

Hm, I wonder if that little pig was off to Market (Street).

:snort, snort: Sparkle is so funny! Our Mommy thought the tour was great! (she's weird) Purrsonally speaking, it didn't do anything fur me, either.

Piggy on a rope? YUM!


hehehe, meow from all of us.

Wow..weally cool photies... Dat pig was dressed up and on a lead BOL!! I've only ever seen dem on a plate or on a bbq!! :)
Big Hugs
Mollie
mollie and alfie

That snorgled and petted piggy would make yummy pork scratchings! No Spitty, pal, they don't make you scratch. You eat them :) When someone is banned because of spurious illegal substance charges, you have to get your pleasure where you can!!

What a nice tour. And that little piggy is something else. Interesting for a pig to be right there in the middle of town. Thanks for all the purrs.

Very nice tour, Spitty. I enjoyed the piggy a lot and want one now!

Pretty neat pictures but I have one question... when your mom was wandering around that rocket ship thingy... did she happen to find any astronauts? I'm still on the lookout for astronauts, you know. purrs

Great tour! Me enjoyed it! Me LVES that rocket ship and the pig! What a tasty looking little thing she is! Me would just LOVES to has her come visti me! Me would has a fire in the firepit in the backyard, just for her! But me would invite all my cat friends too.
Kisses
Nellie

Whoa! When TW was in SF, she didn't see any cool stuff like that. She shoulda had your human as a guide. I think that weather station measures the temperature and dewpoint and stuff like that. Pop would know. We used to have a pig in this town too or so I was told. No doubt some cat beat me to it. When your human was petting the pig, did she happen to feel any Spare Ribs? HAH! I'll bring the BBQ Sauce.

Pigs are very smart--you might get more than you bargained for, Spitty!

Good golly. Look at that PIGGY! And Spitty, it's PINK!

Re: pork scratchings! Never had them myself, but sounds like those rind thingies! I would love to scratch that piggy though lolol >^,,^<

Oooo yummy looking, I mean, sweet looking piggy. Star, who as you know has a fondness for bacon, is packing a few things to come over and help you find the little fellow..
No Star, I don't know where your pork detector is..

Lovelovelove it Spitty.
We think your city has some of the most beautiful places to see, and we really appreciate it when you share them.

We are SO there Spitty! What a cute darling, delicious, succulent...*slurp*.....piggie.

I think, for the sake of being a friendly city, you should have got a bite or two of the piggy - just to make friendly of course!

There will probably never be any bathtub photos, Spitty. What happens after the screeching stops and the fur settles is my mom scolds Russell until he retreats to the living room and then she tries to coax Caroline out of the tub. Caroline only cries and won't budge. Then Mom has to perform Caroline Transport, which takes two hands. If she didn't, Caroline would be there all day. :-)

We'd love to help you "make friends". Has your mom seen The Awakening? It used to be along the Potomac river in DC but was moved to a different location further south on the Potomac in MD. We're not shore (haha!) why these things are near water. http://dc.about.com/od/neighborhoodphotos/ss/National-Harbor-Pictures_3.htm

Maybe this is a better link
http://dcmemorials.com/index_indiv0001120.htm

ok, ok...Mom and Dad both agree...some of that 'art work' along the Embarcaderro is totally weird!!! Seriously, just strange...so glad your Mom likes it...but Sptitty...really!...a bow and arrow stuck in the ground for the seagulls to shit on???!!! I ask you...why, oh why???...paws to head, shaking head...

Fer crissakes. The weather station LIES about the weather! That's what it does. Spitty, you ought to have your Human examined.