As all you Kitties know by now, Kozmo's One-and-Only, Callie, has disappeared, apparently the victim of a heartless Catnapping by one of Nellie's discarded Exes.
(Lessons to be learned here: 1) Nefur have just one One-and-Only--I mean, who will comfort you when she's Catnapped? If you have numerous LadyCats, there's always someone at the ready to step right up and attend to your needs! 2) Nellie should let her ManCats down easier--and don't I know it! I gotted dumped with nary a word--just opened her blog and there she was, all engaged to someone else. But I digress.)

Kozmo arrived at Casa Spitty on the trail of Wu-Tang. However, our meeting with him in Chinatown ended with our agreeing he had played no part in the Catnapping, having moved on years ago from Miss Nellie.

After a time UTT trying to figure out what a good FBI agent would investigate next, we decided to check out likely Callie hangouts. We theorized that she was probably driving her Catnapper to drink (to Nip?) with her constant whining, so she'd easily convince him to take her where she wanted to go. 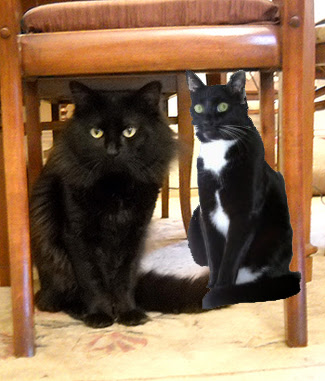 Our first stop was the legendary San Francisco War Memorial Opera House where a performance of Rigoletto had just concluded. Callie is well-known for her caterwauling beautiful singing, so we thought she might drag her CatNapper here. 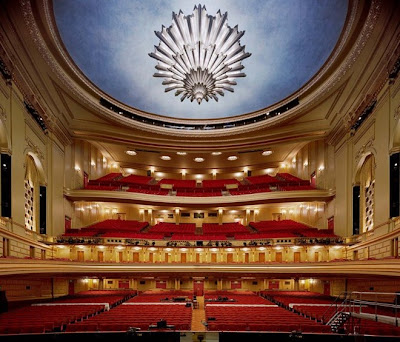 Everything seemed normal at first, but after hours of skilled investigation, we found it:
Callie's tell-tale furs lurking on a front-row seat. We were on the right track! 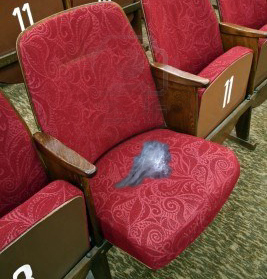 So, we thought, where would they go after the opera?
Why, for sushi--where else? It's fishy, it's bite-size, and the Catnapper knew she'd shut up
as soon as her mouth was full....and by now, he'd relish the silence. 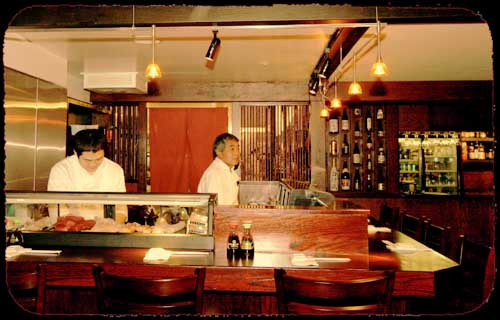 Arriving at We Be Sushi, we noticed the lovely full trays of delicious ebi rolls, hamachi, hotate, kani, maguro and more! Mmmmmmmmm, tasty! 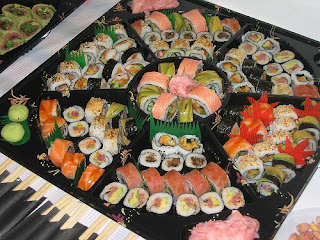 And soon enough, at a recently-abandoned table, we found the evidence we sought: 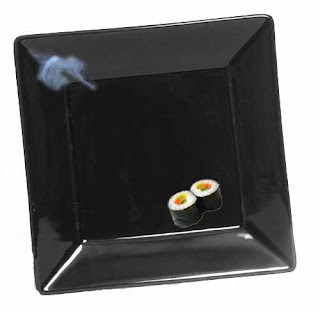 By now it was morning, and we recalled Callie's love affair with the Bling. We headed over to Union Square to the ultimate purveyor of Bling, Tiffany's. 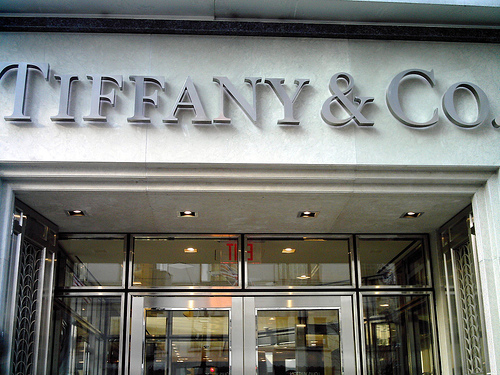 As soon as we arrived, however, we were met with agitated employees and a number of police detectives. As a professional courtesy, they shared with Kozmo and me that a diamond necklace of fabulous cost had been boldly stolen just moments before, by a sweet young thing in a fur coat, who'd left behind no clue but a few tufts of her garment: 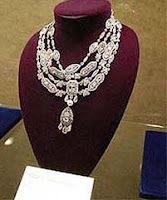 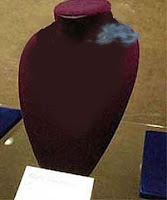 By now we was thoroughly flummoxed. We was outta clues, outta ideas, outta luck.
We needed fudz and napz in our own home. We needed a plan.
Kozmo was all but useless, mooning around over his Lost Lady Love and frankly I was getting tired of the constant weeping and wailing over this LadyCat.
Hey, Bro, find a new one! Shuddup already! Sheesh, Nellie's right--you've got it bad. 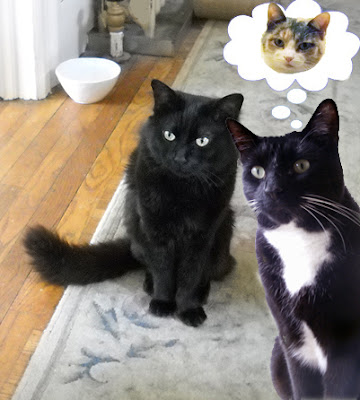 After a meal and a good sleep in the Crown Bed, Kozmo seemed to brighten. He claimed he had a new idea and he needed to take off to explore it. Last I saw of him, he was bouncing down the street ready to teleport over to....well, somewhere. He was pretty secretive.
Good luck, Pal! Keep me in the loop. It was loads of fun working on my first FBI case. 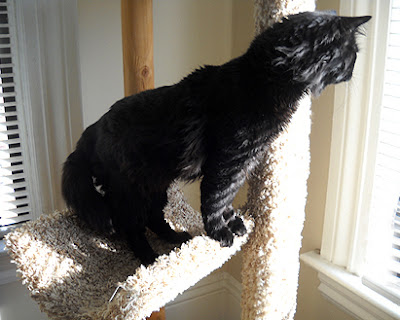 My esteemed King Spitty, Prince of the Heatlands

You really do Get Involved, don't you? Next you'll be hosting one of those awful chat shows, allegedly peace making between warring ex partners. I am not so sure I can agree with your philosophy on matters to do with romance and ladycats though as I am a devoted one girl King.
However it's my birthday today, so if you think you can make it over without causing a major diplomatic incident, you are most welcome.

Goodness, imagine you, King Spitty, ye ol' womanizer, complaining about a mancat who loves a girlcat.. Or is it that he's only interested in one whereas you must have them all? MOL

Star says: Dearest Spitty, I wonder if you've had a moment to check the pockets of your hazmat suit yet.....

You spiffy man cats get all the best things in life! We love that tray of sushi :-)

That's quite a bit of detective work you did there, Spitty. We think the recent tutoring you had gave you the ability to devote quite a bit of your attention to things other than ladycats. :)

Spitty, looks to me like it's all an excuse to have a gad about with someone who could be me but isn't me! However, cos it wasn't me, you didn't exactly have a ball, did ya! All this mooning around and eating sushi! It can only end in tears! ;)

Mom said she got up at 0500 this morning (cold and I was on the covers holding them down so that she couldn't pull them up and over her) and this blog made getting up all the more worthwhile!

You will prevail, King Spitty. And Kozmo-I wonder where he teleported to? And Callie- has she no sense of caution? She ought to make her cat napper brush her! She is leaving far too much evidence against her lying about. Oh! Maybe Kozmo is gathering up the furs?

Goodness, the plot thickens. Where is that Calle. Spitty, we know you were a huge help to Kozmo and hope he keeps you in the loop. We know he will find Calle. Have a great day.

You better re-think the "no one-and-only" dear Spittikens, or you may find the tent filled with ravenous chimpmunks with sharp teefs!

Not that I would do annything, of course...

Wow, Spitty, you kitties are full of surprises and fun!:)
Cotton

You did your best dude. No sign of her on The Streets of San Francisco. Clues but no sign...she's moved to territory.

I'm innocent and I can prove it. I don't know none of them. Oh, heh heh, sorry about that. Just had a flashback there. Good luck to Austin. He might check out my pawty tonight cos everyone's gonna be there, maybe even Callie.

Spitty - Sassy here. All of those places you went to sounded like places Callie would want to go to -but as she is a short haired cat, she does not usually shed that much. Could this have been someone else? Or maybe the stress has gotten to her?

Oh My Cat! You were just across the bay from me!! I will dash to the BART station to see if there are any clues there in case Callie grabbed BART to escape her catnapper. I have been snoozing away the days for so long, I am up and frisky now...all intruders gone! Paw pats, Savvy

Hey Spitty, if you are clueless you might try Seattle!

Oh, Spitty, you are such a cad! We're glad you at least put out considerable effort to help Kozmo find Callie :)

It sounds like you followed every lead. I'm sure Callie will be found safe & sound. With the FBI hot on the trail, how could she not? purrs

Spitty you are head director of the Feline Bureau of Investigation!!! Way to go!!!

Oh my, what an exciting, fun FBI story!! One of things I enjoy in spy movies is travelling! I loved you took us to all these places and mmm sushi looks yummy :-) BTW Callie has left so much fur! I hope she is not bald when she is found. I wonder where Kozmo teleported...hope he will find her!!

Dear Spitty,
Thanks yous for taking care of my CLUELESS brother! Kozmo has arrived home and is making the swearing sounds everytime he looks at me! Me can't remember who this is and there are no Chinese Restaurants within 60 KMs of us right now...
Yous is a goodhearted cat
Kisses
Nellie

sushi is not cheap. check out a pawn shop. bet the necklace is there. your friend? long gone, I bet. maybe head to Las Vegas next. just a thot.

Spitty, we think it's actually nice that you're helping Kozmo find his beloved Callie. Though for some reason, we think you have ulterior motives...like getting out for sushi.

OMC! That's too much suspense! We want to know too!!

DOOD, we're still in the gurlz-have-cooties stage, so we think Kosmo's just plain WEIRD over this whole Callie thing!

though Allie did drool over the Tiffany bling....