The Human's Night Out

Kitties, as you know we live in the urban jungle and have no garden, only cement. (Well, I do have my giant tree-plant, but that's it. And I am trying to consume that, leaf by leaf.) So unlike our more fortunate friends, we have no pretty flowers to show on Thursdays*, when I notice that many kitty blogs have garden tours.
*Yes, I know it's not Thursday, but I am not sure she does
We have been feeling a little left out, so we are instituting the occasional Not A Garden Tour feature, during which you will be subjected to snippets of my Human's life. Wednesday night she went to the symphony and heard Mozart's Requiem, which was transcendent, a good thing since her work remains so very sucky. (In fact, Requiem might even be an appropriate accompaniment to her days.)
She usually confines her photographic activity to taking pictures of ME, but Wednesday night she took her cheap a$$ trusty camera along for the ride. 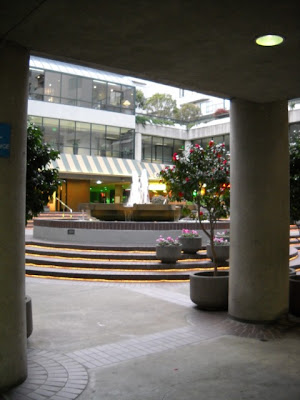 The evening began at Opera Plaza, which sports this cheesy fountain and steps lined with year-round Krissymouse lights. She and her companion ate at Max's Opera Cafe, a reasonably-priced, one-step-above-a-diner restaurant close to Davies Symphony Hall. 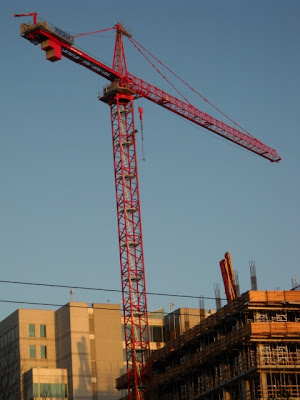 Yeah, so on the way she took this shot of a random crane. Imagine it as a daffodil or something. 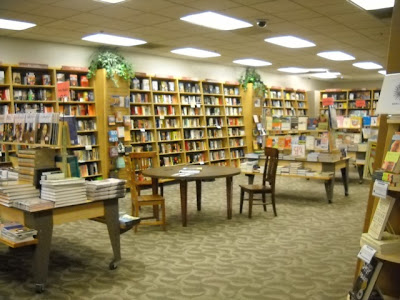 Before she met her friend for dinner, she stopped in at Books, Inc. a nice local chain bookstore, which, as you can sadly see, is perhaps not long for this world as it appears customer-free. She purchased a novel called Await Your Reply because she liked the first page and she felt bad that maybe the nice clerk hadn't sold a book all day. 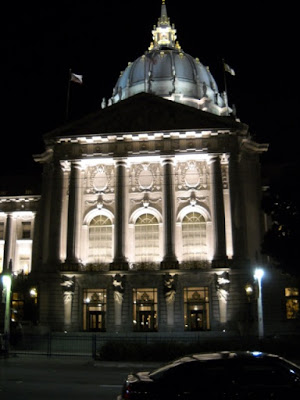 Okay! Now we're getting somewhere. This is City Hall which gets all lit up at night, just like Disneyland! It is on the way from the restaurant to the symphony hall. This Beaux-Arts building replaced an even fancier version destroyed in 1906. 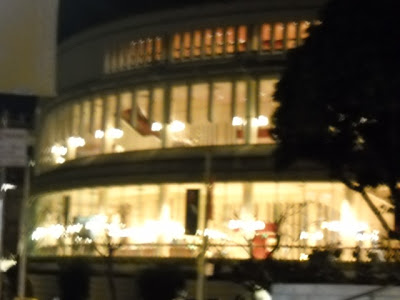 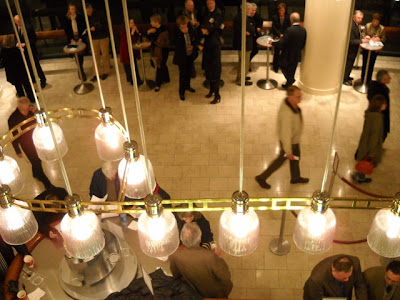 Here are some people walking around during the intermission. It's a beautiful building. Why didn't she take  a better picture? Wait--don't get me started. 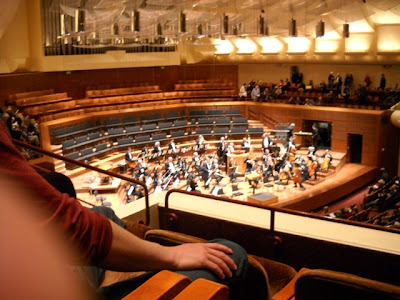 Here are all the music peoples right before the second half of the program. See all the empty seats above the orchestra? Well, you know what? They all got filled up with the really good singers who sang the Requiem, yes they did, and it was really good, too, and loud.

So there you go, Kitties. Our first Not-A-Garden-Tour. Stay tuned!
Posted by Spitty-the-Kitty at 6:15 AM

We loved your "Not-a-Garden-Tour." It's always fun to see a bit of where others live.

The mom loves that word "transcendent." What a wonderful word.

Bravo, I liked it too, it's fun to get a purrsonal tour!

I LOVE the Not a Garden. I don't have a garden either, great idea.

That was AWESOME! If your mum keeps this up she will gets better at taking pictures. The "Not A Garden Tour" should be open to those who might actually have gardens too but don't really give a crap about them. I'm IN! I look forward to "Where the He** is Spitty NOW?" tour.

You should haz your mum take a picture of you; keep it with her at all times & just insert it/you into the frame of whatever she's doing. It will improve the image quality of any photo right off the bat! AND we'd get to see you alla timez too.

MOMOMOMOML! word verif is exmacks
as in EX marks the spot where Spitty should be!

That was a VERY impressive Not-A-Garden-Tour, Spitty! While we like our garden, we look forward to more

Spitty
We know you came up with this idea and what a magnificent one it is! We love it. We did a semi garden post this week because Mom found *gasp* a camellia blooming. Now it's a good thing this bush has been here for nearly 2 decades otherwise Mom would not be lucky to even have that.

I think this idea is fabulous!!! Kudos!

Well, that was an interesting Not A Garden Tour! Thanks, Spitty!!

That makes my human sad that there was no one in the book store. She is working on finding stores to make appearances at, as my personal representative for my book, and this is just the type of place she would love to be at!

We truly enjoyed not touring a garden with you. We like Stacy's idea in her comment above...for your human to place a picture of you (or Flat Spitty) wherever she goes and include you in her pictures too. That would also provide the bonus benefit that observers will likely think your human is crazy.

We like the Not a Garden idea too since our Mom kills everything green and we would be way too embarrassed to show our garden!

pee ess - we need to visit more often too!!

I enjoyed the not a garden tour, and my mum went OOOH I remember the City Hall from when we visited SF two years ago!

Spitty, that was a purrfect tour of your Mom's trip to the concert. We loved seeing all those pictures and you have such a good way of telling the story. YOu had Mom falling off her chair laughing. That was a very nice garden tour. There was at least one flower in there. Take care and have a great Sunday.