On a recent Wednesday, the Human and her friend set out for the geriatric a/k/a "Blue Hair" matinee of Armistead Maupin's Tales of the City, which has been made into a musical and may soon be headed to big, bad Broadway. The Human stuffed me into her purse and took me along!

Our first stop was the 7th floor of the Sutter-Stockton garage. I don't care for heights, so I went on down without her. 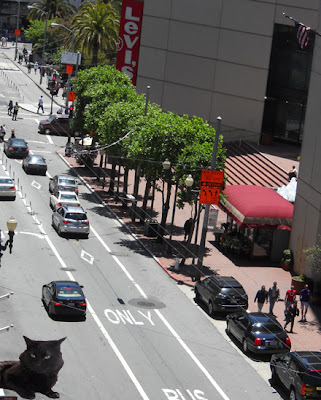 We cut through Union Square, where a so-so band was playing for free. They were not attracting too much of an audience. I relaxed briefly in the sun. 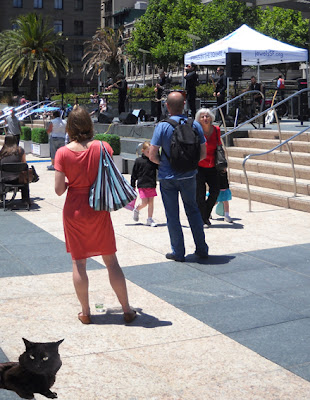 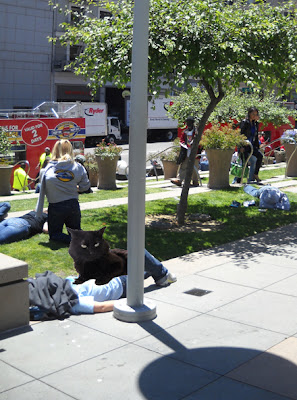 While the Human took yet another photo, I hung out in the treetops. 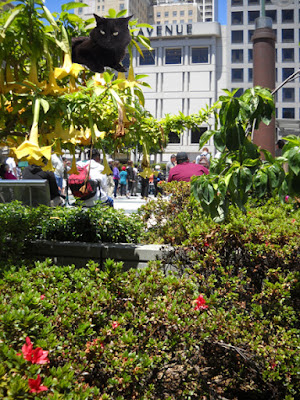 This lady outside a Geary Street hotel looks like she's been waiting a long time. I tried to make friends but she didn't seem interested. 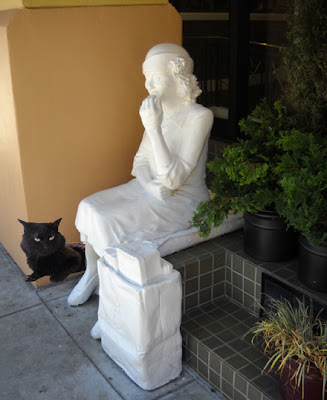 Look! They put me on the cover of the program! Do you think they'll give me a role in the show? 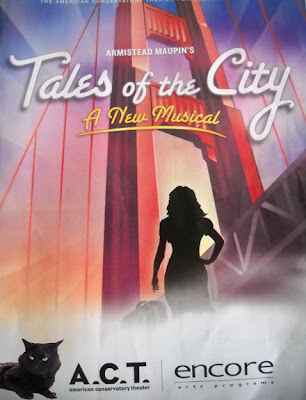 Well, no starring role, but Spitty scored himself a BOX seat, yes he did! 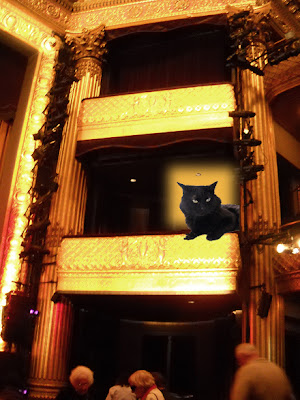 Afterward, we all went to a restaurant full of people who reminded me of the lady outside the hotel. This lady had mints. Drat--I was hoping for Valerian root. 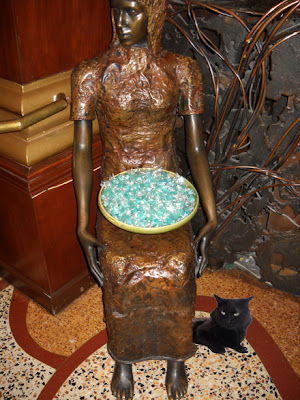 This guy seemed pretty stiff, not like that great guy at Union Square. 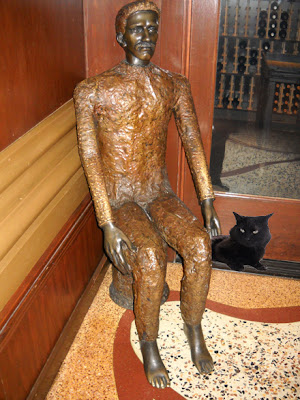 This guy wasn't even a Human at all, stiff or not stiff. To be honest, he creeped me out a little. I didn't stay long. 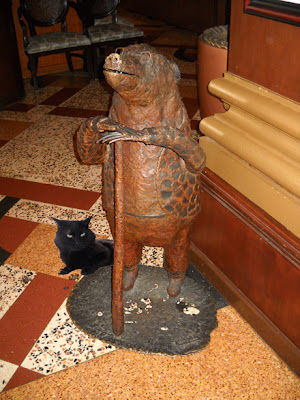 The Old People matinee got out before the restaurant was even really open so they had to sit in the bar and get sloshed have a tiny ladylike cocktail. I kept an eye on them so they didn't get too out-of-control! 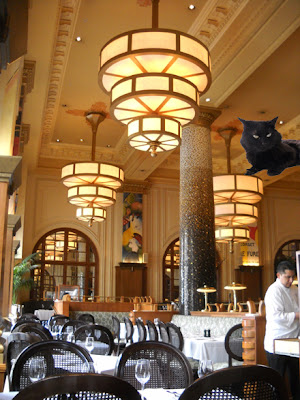 Okay, Kitties, that's our Not-a-Garden-Tour for today. Hope you enjoyed it!

Your Not-a-Garden tours always are terrific, Spitty! And hey, you got a box seat, which surely must qualify for International Box Day! :-)

Wow, what a fun day you had, Spitty!

Spitty..thank you for this..Mama is just grinning like an idiot seeing you in s
all those places. xoxo

Say, does your Human's blue hair GROW that way?

Nice not a garden tour. Hey, you look a lot the same in some of those pictures ....... just sayin'

Spitty, what a great tour! That musical would've been SO much better with you in it. But at least you got that pawsome box seat!

That was fun Spitty! Hey, you can order whatever you want at that restaurant!!!

That tour was fun! Wasn't that 3rd stiff creature a large HAM?

We love any tour that includes YOU, Spittola and our favorite city in the world. You certainly met a lot of stiffs though.

Spitty that was hilarious! I love you on the sleeping guy's tummy! Nice and warm! And box seats! How classy :)

I love San Francisco. I was there a week once and it was not long enough!

Spitty that was pawsome! But next time I want to go too. It'll be like a -- date. *blushes*

Spitty
YOU are the purrfect tour guide!

Spitty I LOVE how you march to your own drummer!!!
OMC this was priceless!
You sure get around Spitty!!!!
Thank you for this wonderful "not a garden tour" post!
xoxoxo

Wow that wuz a kewl day owt! When we gets owr catio we want you to come visit an see teh sites here too.

The Misadventures Of Me said...

OMC! What a pawsome day yoo had. We fink dey shud had at least put fresh nip where the mints were.

Spitty, you're lucky to get to go to places. I used to, but then my mom got unbelievably lazy. I enjoyed seeing these things with you.

And speaking of unbelievably lazy--and since I know my mom will never get around to taking a picture--here's a link to the mosaic we had in the house and now have in a closet.
http://williamthecat.blogspot.com/2007/04/q-and.html
It's got me and my old bro Eddie in it!

Spitty, we liked you laying on that guy's stomach. That was something. Haha!!

Dood, you're so lucky. My people go into SF all the time but they NEVER take me. I want to go see the seals! I bet they taste like chicken...

You get to go on some seriously good adventures, Spitty!

Nope...not a garden but very pretty for an inside place, hahameow! Thanks for visitin' our bloggie...it reminds us to come visit you, too!