And Now for Something Completely Different

Now, usually the Human's workdays are pretty ordinary, but Furriday was a little more exciting than usual! The Human visited the chem class for a little pre-holiday fun . . . 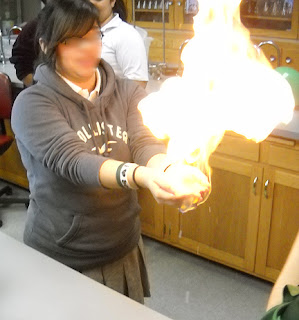 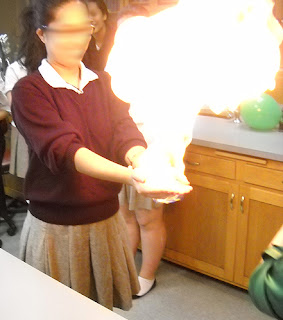 The Human was even persuaded to try this herself; she says it was really quite a startling experience (I have it on good authority she gave a  frightened little yelp, but she says she was just surprised. I'll let the reader decide). She could explain how the trick is done, but she doesn't want to spoil the magic. Hmmmm.

Oooh, that must have been pretty exciting!! Chemistry magic tricks help to make students enjoy science much more. Can Mom send her students to your human?

oooo pritty! But Iz wud haz to run utb if I did see that skardy fire

YIKES! What is UP with those SKIRTS!?!

Oh Spitty, that looks like a great big ball of fiery fun! I am sure I would yelp, too.

And may I say, you look pawsitively adorable in your festive hat!

Pretty cool!
We know what's up with those skirts! We remember your human is principal at a Catholic school.

WOW!
And just letting you know that I will still enter you in the giveaway Spitty, even though your mom doesn't have FB ;o)
xo

Look Amazing !!! They should cook some chicken by those fire ; )

Amazing Spitty! Make sure mommy doesn't come home and start practicing or you'll have to come here with me, Mom Carole to be safe! (it's a trick..I just want to get my hands on your beautiful furs.)

Wow, what is this magic?! It sure looks exciting! Please tell your mom to reveal the trick 'cause I really want to know how it's done!

Cool! Me thinks me would not want my Mommy doing that at home though.
Kisses
Nellie

Fire + kitties = bad, bad (at least that is what my Mommie says when I try to get near the fireplace)

My human took chemistry in high school and she says she never got to make anything that fun - just a cloud chamber and some other stuff. But later on, AFTER high school, she learned how to set her fingers on fire with 151 rum without getting burned.

Fire! Fire!! Is it warm? It has gotten so cold here that we would pack up in a minute to get some warmth. BrrrrrrPurrrr.

Skeery! We (including the Mom) do not like fire. That would efun send the Mom UTB! Hahameow, we just got a visual of that!

That looks like fun although I don't want even fake flames near my furs.

I was gonna say the same thing as William!