This is our little curlicue Krissymouse tree that the Human bought a few years ago. It's cute, but I would have preferred a real tree I could nibble on, use as a scratching post, or climb.
But nevermind The Kitty's needs. 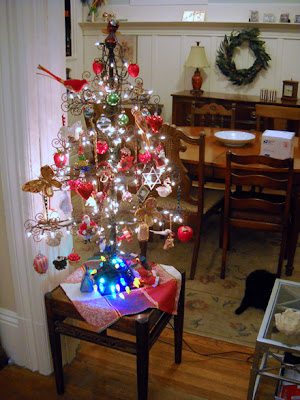 This little horn was always on the Krissymouse tree when the Human was just a little girl. It's lost a few sparkly things over the centuries decades, but she is still fond of it. 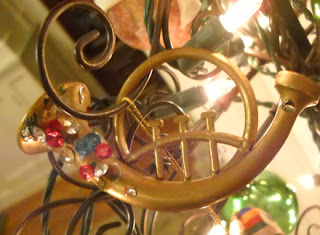 The Human's mother saved this odd little WWII-era ornament because apparently there was no metal available to make ornaments so they began to make them out of some kind of early plastic. It's not verreh pretty but the Human says it is "interesting." Whatever. 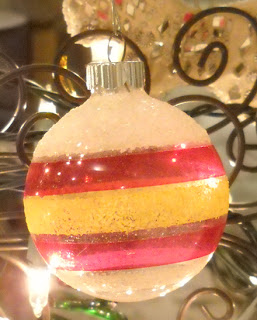 The Human's mother bought this butterfly when the Human was a kid and even though it's too large for our little tree, the Human insists it (and its companion, lower right in tree pic) alight on the tree every year. 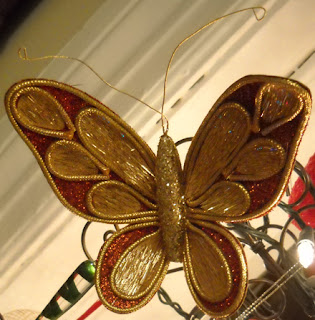 This little sugar bowl is all that remains of an ornament "tea set" that was her Grandma's. Sadly, the pot and creamer have been lost in the mists of time (I-had-nuffing-to-do-with-that-I-swear!) 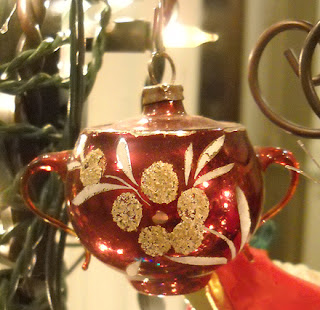 Finally, this Santy is her favorite ornament, another one that belonged to her Grandma. She says it's so old and delicate it might break just by looking at it funny, but I don't really see how that could happen. I've been staring at it a lot though, just to see. So far, nuffing has happened.
I'll let you know if it explodes or anything. 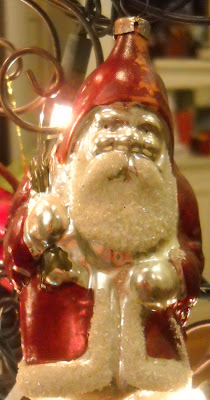 Lovely tour! You be GOOD with those precious old ornaments now, Spitty, you HEAR?

I luv seeing all your preshush ornamints, mebbe if I plays by teh tree herz will halp me powst a chrissymouse post on mai pore bloggy.

That is some cool stuff Spitty! We have mostly old ornaments on our tree but we don't bother them!

That is so cool Spitty! We used to has a couple of pieces from a Christmas Teas set too! Seeing your made Mommy's eyes leaky! Unfortunatly, me was responsible for the demise of the last piece.
Kisses
Nellie

Spitty, we love your tree and the decorations. Your human is brave, though, to put those old ones on. We hope they remain intact! :-)

Spitty, your human's ornaments are verreh, um, interesting...to us! Although we suggest you curb your killer instinct, just this once.

What a wonderful little tree, Spitty! This has got my mom to rethinking our little tree (she's got lots of time on her paws, after all) and remembering ornaments of her youth 8 million years ago. (Sadly, those are all gone.)

Hey, it's snowing like mad at my house right now!!

Fabulous tree! (Though I feel for you my friend not having a real one to scratch the bark on!) The ornaments are wonderful, you know, with the collection of candles your mum haz it's small wonder she only has these ultra special ornaments! So few? That Woman needs some encouragement to ditch many of the ones she haz. We need your mum. Send her over at once!

spitty we know its difficult if not impossible to employ a "hands off" approach on all these wonderfully delicate and antique collection that has sentimental value to your human, but try okay :) and stay off nip while the tree is up (kidding!)

Beautiful, I love ornaments that bring back memories more than ones that are just pretty. I have plenty of both myself and as it's Leo's first Christmas tree, I'm hoping they survive. Maybe I'll tell him he should watch for exploding ornaments like Spitty does! Watching is better than bapping!

My Mommy is in LUF wif that tree and it's ornaments! We don't haf breakable ornaments this year cuz of Princeton. Go figger. xoxo

I love your tree and have several similar ornaments that belonged to my grandparents. Your tree was especially nice since I don't have a tree up this year because we're getting a new kitten right after Christmas. Can't wait!

That's a unique tree! And it's so nice to put up ornaments with so much meaning, well, to your human, at least. We hope you'll get something YOU want under the tree on Christmas day, Spitty.

That's nice tree... if you are a human. It does not sound particularly useful for kitties.

OH SPITTY! Make sure you just try to explode the ornaments by staring now..no batting or swatting or Admiral will bite you and you'll never see it coming!

Oh dear Spitty your commentary does make me laugh! I don't know if you get the programme 'The Antiques Roadshow' over there, it might just be a British thing... but I think you should come over here and present it - I'd watch!!

Spitty
Da Mom here....we always love Christmas because it is about memories. When the tree is decorated you can tangibly feel time while unwrapping each ornament. Mom has one ornament that was on her Mom's tree as a child so that is over 70-75 years old. It is also a little glass santa figure. Yes Christmas is a lot of memories and your tree and it's ornaments are really beautiful.
purrs
>^,,^<
♥Abby♥Boo♥Ping♥Jinx♥Grace♥

Those are great ornaments! Especially because they all have special meaning to them :-D
Our tree just has cheapo ornaments... works well for me since I keep stealing them to use as toys, mwahaha

Peeps have lots of old stuff w/"fly dirt" on it. Their fave is faded cloth Santa. BTW, the ornament you told me to swat is the one unbreakable one on the tree. Someone swiped it from the tree in Jersey City hall about 20 years ago. I did knock an ornament down yesterday. Just as I started to bat it around, Pop grabbed it.

Better not break those Spitty, your Mommy might have leaky eyes if you do.

Oh wow, those are cool ornaments. I think I would be nervous about putting a paw on those...not that I would ever do that.

Those are some nice ornaments, Spitty! Good thing Ernie doesn't live in your house...he would have climbed that tree no matter how small it is!

Spitty we soooo enjoyed that tour and we loved hearing the background story to the ornaments. Your tree is sooooo beautiful! We love it!

Spitty, unless you want to be a memory, we suggest you cease and desist.

Happy holidays to you and all of your family!

That Santa does look like he's thinking of exploding...

We have a couple of those WW2 balls and some old ones from grammas youth. They are the most treasured.
And an angle tree topper that has gold lights in it from when 1965, mom was 5 years old. From her Gramma.

You should be pleased to have a tree with such special ornaments!