Kitties!
I don't know if I can stand so much excitement two days in a row!
But guess what?
We opened my Secret Paws present today and it was from CORY and all her brofurs and sisfurs!
Let me show you!!

First, the Human put the open box on the coffee table 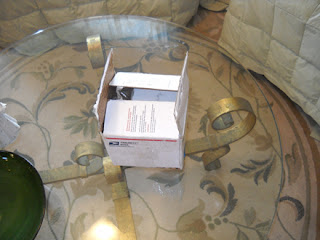 and inside was a card addressed to ME! 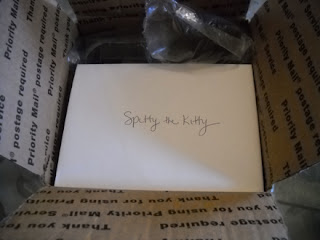 It was a sweet card from Cory and her pals. She said she got me the toys that they like to play wif themselves. 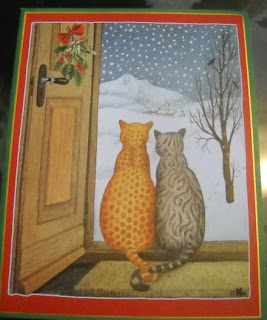 Underneath the card was a pretty package just for ME!! 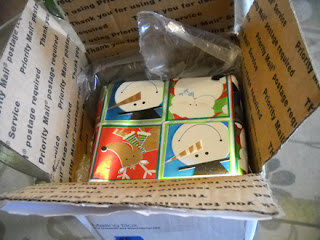 Once I peeked inside, I could see that they were wonderful toys! 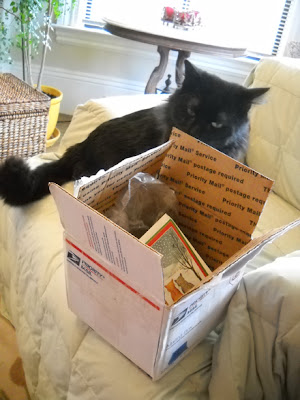 Once the contents emerged, I could hardly believe my good fortune!! 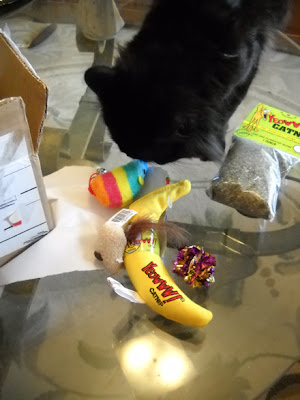 I mean, just look at the bounty!* 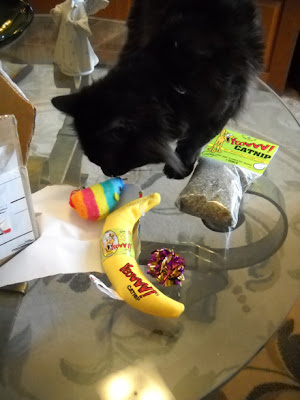 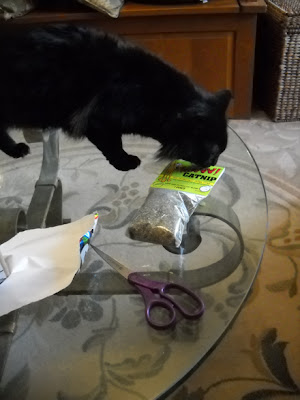 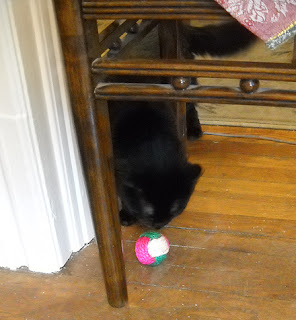 . . . and then I played hard wif my New Nip Nanner 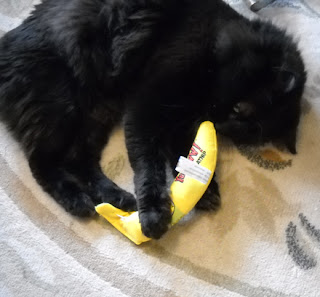 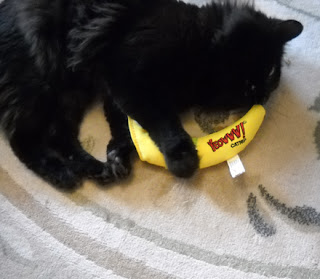 and then I went to sleep with my fishie. 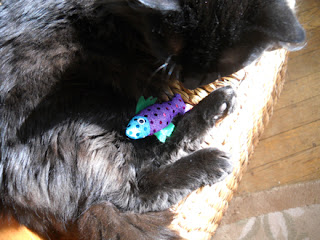 *The Official Pile'o'Loot, which apparently I am not permitted to have all at once since according to the Human I will "appreciate it more" if I am given things one at a time. Now I ask you, does that seem fair to you? I thought not! 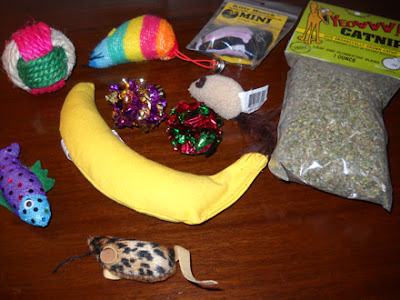 Wow, Spitty, that was a fantastic package! You're lucky you got to open that up before Christmas Day too.

And oh, the card is lovely, just lovely!

Those toys all look like you will have lots of fun with them. My FAVORITE toy is my nip nanner. There is something about the nip in those ............

Dood, you got a nip nanner! That's pawsome! What a great pile of loot. We thinks you should get to pic what you want to play wif. After all, it is yours, isn't it?

Oh SPITTY! The Admiral would fight you..well, beguile you to get that nip 'nanner. She loved hers!!

What a lot of loot! I got peacock feathers, a nip pillow and some Greenies in mine. I love Secret Santa!

oh man you hit the jackpot. concats on your good fortune.

Pawsome Spitty! So glad you liked everything...we kinda suspected you'd love the nanner since you seem kinda attached to your nip cigar! Enjoy your toys my furriend!

FISHIE! Jack wants you to know that is his favorite toy eva... he loves his fishie..

What a load of toys! That nip nanner looks amazing!

Nothing better than to see you enjoying all your loot Spitty, what a lovely lot of gifts you got!

Pawsome toyz Spitty *high-paw!* Cory wuz rill nice to be your Sekrit Santy Paws but its nawt nice of your staff to keep your noo toyz. Wants me to come ovar? Mai claws iz still nice an sharp...

what great presents....we LOVE those crinkly balls - they are great to play with in the middle of the night and leave in the hall to scare the mom. MOL Merry Catmas!

Wowwee! They took a vote here and said that you should be allowed to go into toy overload coma before some are put away, MOL!

You got a nip nanner!!!!
We are so jealous! We hear those things are great!

WOOOOOWEEEEEE Spitty you hit the jackpot! We know you will lots of fun with all of those toys.
purrs
>^,,^<
♥Abby♥Boo♥Ping♥Jinx♥Grace♥

OMC! Cory and her family got you the EXTRA POTENT nip toys, Spitty! Your head is probably still reeling - awesome!

Oh Spitty!! What a wonderful present Cory sent you!! The card is really pretty and, oh, a lot of fun toys!
I hope your human will let you play with them all soon :-)

Spitty, that is one terrific haul! We see a nip hangover in your future.

How supremely excellent, Spitty! Happy Christmas from Pisi and Squeak!

Holy smokes, Spitty! It's like you won the lottery of cat bountitude! Merry Christmas, buddy. :)

Spitty! Yous the luckiest! Me is drooling just looking at all the nip! Perhaps me could scoot by a little later for a nightcap....
Kisses
Nellie

What GREAT stuffs Cory and Friends sent you!

That is a pile of loot! We're so glad you enjoyed participating in the Secret Paws this year.

NIP BANANA! Dood, that's like the BEST thing EVER!

What pawesome new toys!! You are such a lucky dude. We're all jealous.

That is totally awesome.