On a street very near the Human's school live Tom and Jerry, a gay couple who for the past 20+ years have brought true Christmas Spirit to the neighborhood.
The tree is living, a 65-foot Norfolk Island Pine, which they purchased as a house plant in 1973. Every night between December 11th and 24th, Santa Himself visits for about three hours, distributing candy canes and listening to the wishes of children and grown-ups alike. Music plays, carolers sing, toys whirl and spin, and much festivity and frivolity is shared.
It is a wonderful San Francisco tradition! 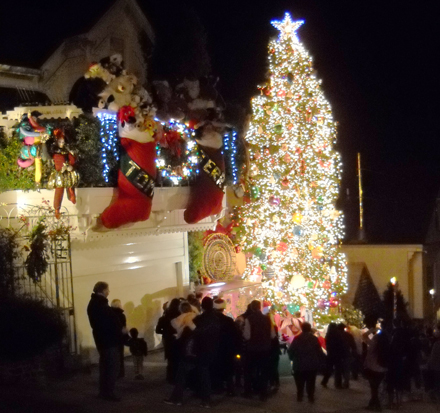 Since the Human's cheapo  inexpensive camera does not take good pictures at night, here are some daytime ones to show detail:

This is mostly to show scale--you can see the girl sitting on the bench (circled) looks pretty small! 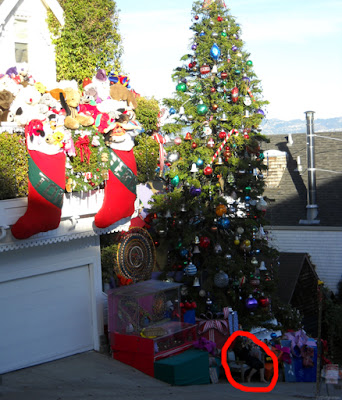 The tree has a nice big fat star (which obviously looks more impressive at night!) 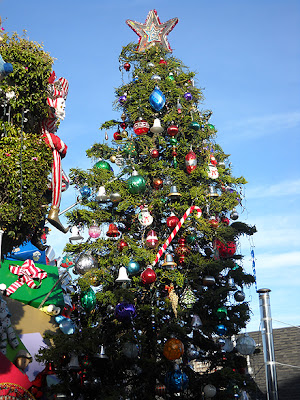 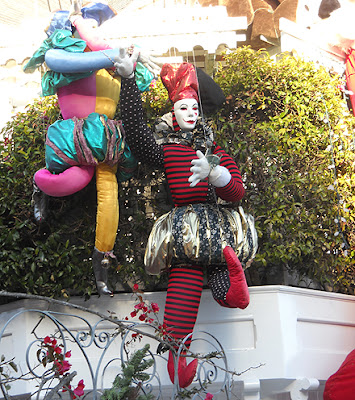 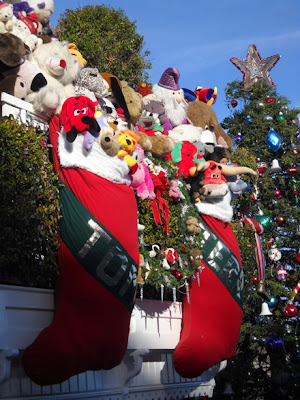 The spinning ferris-wheel thingies are in front of a nice big stack of presents! 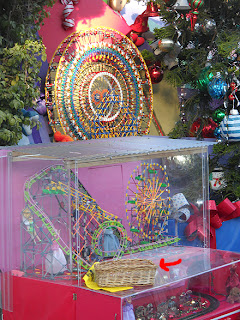 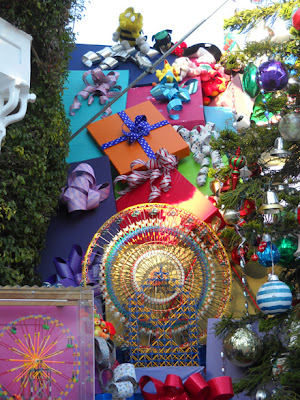 There's only one flaw. Have you spotted it?
Yes, I thought you would!
Where's the kitty???
Meowy Krissymouse, Efurrybuddy!
See you Monday!
Posted by Gigi at 12:08 AM

Merry Christmas to you !!!!
I wish you and your family have a very best time : )
Love
xoxo

WE think that this tree beats all trees! Do those guys need a few kitties to live with them? Cuz we TOTALLY like their style! A lot like Daddy's come to think of it...hmmmm.
Now we're unsure of a few things.

ANYWAY, Merry Christmas from all of us here at the Lounge, and Spitty, no that wasn't a dream...I REALLY was there! XX Your Juliet, FDW

That is totally amazing, even without a kitty! One of the best gifts I ever received is your friendship! Merry Christmas Spitty!

Thats pawsome but it wud be much much better wiv lots an lots of kitties! Meowy Chrispmouse Spitty!

Wowee, that's a tree! What a great tradition. Maybe the kitty is deep inside the giant tree watching all the admirers!

Merry Christmas to you both!

That is a gorgeous tree. What a nice thing to do for the neighborhood and it looks like a lot of fun.We sure do wish all you a very Merry Christmas. Take care.

Wow, that is amazing!

Wow. Mommy says there are no words for that extravagant display! Can you imagine the amount of kitteh snoopervision that would take??? Thanks fur sharing this piece of Christmas cheer wif us. Merry Christmas, Spitty. xoxo

Now that is an outdoor Christmas tree! We wish you a Merry Christmas and lots of kitty treats!

OMC OMC OMC. That is about the most amazing Christmas tree EVER! And look at the size of those stockings! Tom and Jerry are just awesome!
Merry Christmas everyone! We hope your human gives you a *dose* to celebrate. :)

Merry Christmas to all of you!

Yeah, Spitty, that is a fabulous and festive setup, but it is a mere shell of what it could be if only there was a kitty there! How come so many humans don't realize kitties and Christmas are synonymous?

Pawsome! That tree is huge! Merry Chrismas to you Spitty and your human.

That is one beautiful tree and great decorations, Spitty, but you are right...it needs a KITTY!!!

We are so blessed to have you in our lives, handsome Spitty=we love you!!...Merry Christmas sweet boy...kisses x3...Calle, Halle, Sukki

Oh my goodness, that is a huge tree and what a beautiful decoration!!
I wonder Tom & Jerry is their real name? They sure got a big Christmas spirit!
We wish you and your family a very Merry Christmas!! Stay warm and safe, and enjoy!!

Have an amazing holiday, Spitty!

What a great tree Spitty! The Socks is pawsome too! Wes patiently waiting for Santa Paws! Every year he comes on the fire truck and stops at every house in our village! Me is going to put up the pictures of him at my house as soon as he comes!
Me is getting furry excited and Kozmo is bouncing off the walls!
Kisses
Nellie

Meowy, Meowy Chrissymouse to you too!!!

A Very Meyowling Christmas to you too!

It's sights like these that make Christmas extra special. Thanks so much for sharing!

We are wishing a Happy Holiday to our friend Spitty!

Awesome, and heart warming. What a wonderful tradition for so many to share. Merry Christmas.

Meowy late Christmas to you, Spitty, and to your human family.

We hope you got lots of vittles and scritches.

Those photos of the decorated tree are wonderful. What a nice tradition put on by Tom and Jerry for the whole neighborhood.

WOW! What a magnificent tree!
And what a great festive celebration.
Hooray for those guys bringing joy to so many!