The Human and a friend had a very ladyified afternoon this week when they went to Afternoon Tea at the Ritz-Carlton hotel downtown. Ordinarily, the Human schlumps around in neighborhood cafes and her own kitchen, but once in awhile, everybody's gotta dress up and act fancy.

They had to climb a Big Hill to get there. This picture, looking back toward Union Square, provided a good excuse to stop and catch her breath. 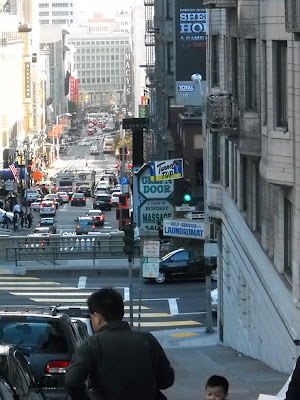 The hotel looks like a bank from the outside (and you'd probably have to rob one to stay overnight), but there was a pretty tree! 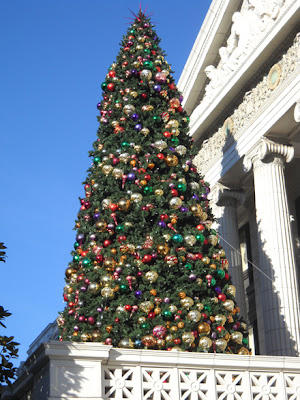 Now here's an oddity. Just inside the main doors were these glass jars filled with unshelled nuts. A nutcracker was thoughtfully provided, and it seems someone had cracked herself a nut or two, but it wasn't the Human or her friend! 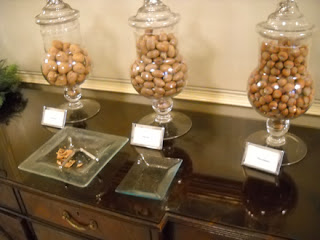 Right inside the main doors was tree #2. 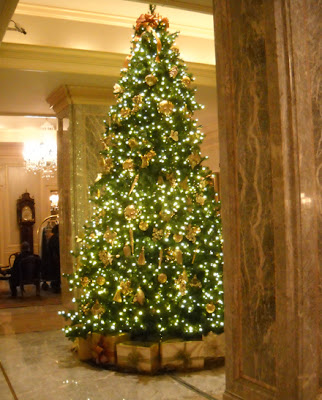 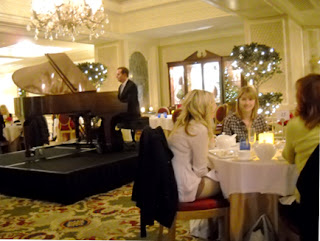 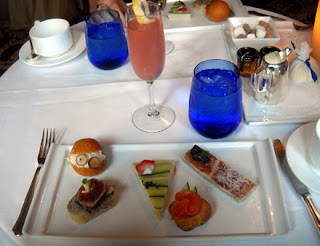 After two hours of ladyfication, the Humans headed for home, pausing to take this slightly blurry shot of the BofA building behind the hotel. 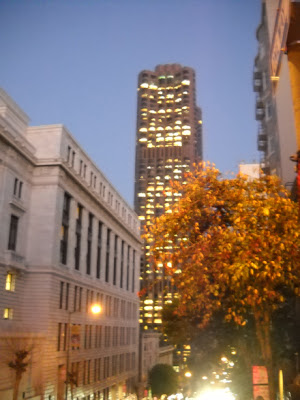 And thus ends our 11th Not-A-Garden-Tour--Hope you enjoyed it!
(Did you notice the appalling Lack of Kittehs? Yeah, me too. People never take the kitty anywhere, do they? I mean, I woulda liked me some a them little sandwiches, you know.)
Posted by Gigi at 6:24 AM

Spitty, any post would be better with you in it, but our human still enjoyed this one. Being that she's been to San Francisco twice and very much enjoyed herself when she was there, she quite enjoyed, as well, this Not A Garden Tour. Happy Holidays!

Beautiful outside tree. There's a hotel in NYC that has a resident kitty that greets visitors as they come in. Maybe this over-priced hotel can do the same.

We're all for eating some of those little sandwiches.

Hmm, me thinks they might let a beautiful lady cat like me come for afternoon tea! What a great spot to go for ladification! me (and Mommt) wishes they could go too!
Kisses
Nellie

Looks like a really fun time to me...if that place only served catnip!

That was wonderful Spitz. But yes, it was glaringly obvious the lack of furred felines that would have *really* made the place classy.

So why didn't your human bring back some of those tiny sandwiches for you? I'm sure she could have fit a tiny tuna or chicken or caviar tidbit in a pocket. She sounds as thoughtless as my mom when it comes to sharing food.

Anyway, wonderful pictures, even if you aren't in them. :-)

The Woman is kind of amused because she's walked up that very hill more than once ON PURPOSE while she was practicing her walking. But she didn't know that building was a hotel...she wasn't sure what it was but never guess hotel!

Those little sandwiches look like the purrfect size for kitty mouths!! We think she should have brought you some home.

You mean your human did not bring any of those tiny sandwiches home for you? How shocking!

PS/ We think you need a "dose" to recover from this shock. And certainly some on Christmas day!

Poor Spitty, left behind, abandoned for hours while the human luxuriates (is that a word?). Well, I'm sure you can get some guilt treats out of her if you act all heartbroken!

WHAT?! They did not bring home any kitty-sized sandwiches for you, Spitty? The nerve!

We love your new Christmas banner, especially you in that Santa hat.

Looks like your human had a good time at that ladyfication thing. Love the photos.

"The Boys" and I wish you a Marry Christmas and a Happy New Year.

WE loved this not a garden tour. What a great trip! But no kitties now that Spitty is a shame. Not even one hair??

Those little sandmiches would have never filled us up, Spitty.

I am with the other kitties. You have been mistreated. You deserved a kitty bag!

As my furriend Fin would say....what the fluff???

I mean there was your mom at a fancy schmancy place that serves cat sized food...and kitties weren't invited?

Pee ess...my sister Jonesie blushed at your comment. She is indeed THE Jonesie...founder and Purresident of The Society of Feline Gardeners. She's very low key about her fame.

It's all so beautiful, it makes us feel festive! Rumblemum still says it's weird to have xmas in summer.

Well it's always a shame when there's a lack of kitties but still a beautiful post! So Christmassy :o)

Ooh fancy - I wish my christmas tree looked lik that! You must forgive your mom for the lack of kittehs Spitty, every cat lady needs a bit of ladyfiction every now and again (I'm sure she took a bit of fur with her anyway!) :)